Bitcoin is showing more signs of a decline as it broke below a short-term rising trend line and formed a reversal pattern. Price is showing a head and shoulders formation on its 1-hour time frame and is currently testing the neckline at $14,000.

A break below this support area could take bitcoin down by $3,000 or the same height as the reversal chart formation. The 100 SMA may be above the longer-term 200 SMA for now but a downward crossover appears to be looming. If this materializes, more sellers could join in and take bitcoin below the neckline.

However, stochastic is pulling up from the overbought zone to signal a return in bullish pressure. RSI also appears to be on the move up to show that sellers are taking a break and letting buyers take over. 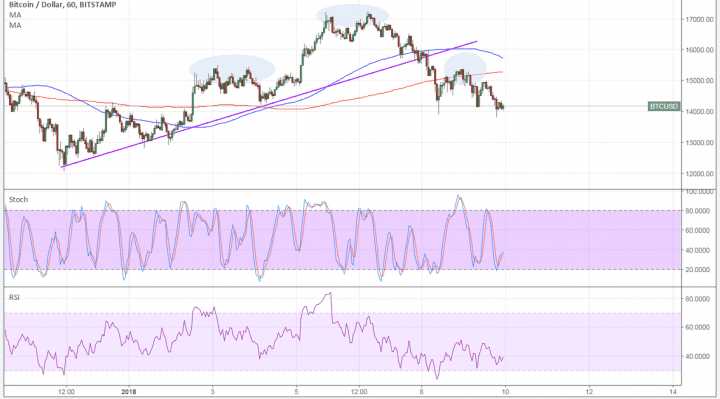 Bitcoin is under pressure from several market factors, including the push for regulation in South Korea, the withdrawal of ETF applications on SEC roadblocks, and the rising demand for altcoins. Investors also seem to be piling their funds back in the US markets as equities soar to one record high after another.

Anticipation for tax reform measures to kick in, along with the positive sentiment ahead of the Q4 earnings season starting on Friday, are being touted as the main reasons for the stock market rally. US bond yields have also joined along, lifting the US dollar across the board as a result.

However, there are still plenty of doubts on the Fed’s tightening plans for the year and investors are waiting for more clues from the CPI report due on Friday. Weaker than expected inflation data could revive fears of slower tightening as hinted at by a number of Fed officials since late last year. On the other hand, upbeat results could shore up hawkish expectations and dollar gains.