Bitcoin recently broke above a short-term descending trend line, indicating that a reversal or uptrend is underway. Price is still completing its retest of the broken resistance and applying the Fib extension tool shows how high it might go next.

However, the 100 SMA has just crossed below the longer-term 200 SMA to signal that the path of least resistance is to the downside. In other words, there’s a stronger likelihood that the selloff could resume from here.

In addition, stochastic is on the move down to show that bearish pressure is present. RSI also appears to be turning lower without hitting overbought conditions, so sellers might be excited to hop in. 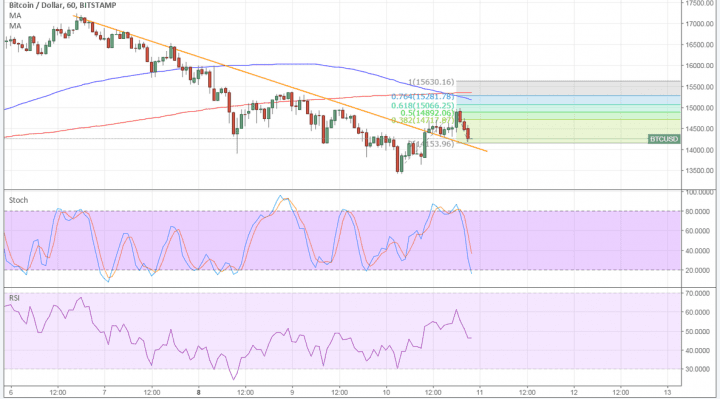 The US dollar is on weak footing after reports circulated that China might reduce its holdings of US Treasuries. At the same time, weak medium-tier data is keeping doubts on Fed tightening in play and it might be up to the PPI and CPI reports to shore up rate hike expectations.

Recall that Fed officials have been warning about weak inflation prospects and how it might relate to a more gradual pace of tightening. However, there have been indications of strong spending and the tax reform package could also prove positive for growth.

As for bitcoin itself, it has been reported that China shut down mining operations in the country, further curbing cryptocurrency activity. South Korea has also made moves to curb bitcoin trading while ETF applications in the US are being withdrawn on SEC scrutiny.

Appetite for altcoins has also dampened demand for bitcoin as competition is heating up. Other cryptocurrencies are far cheaper and offer larger potential upside compared to bitcoin that appears to have topped out last year.