Bitcoin continues to trend lower in a tight descending channel visible on the 1-hour time frame. Price is still close to the resistance and might be due for a move back to support soon.

The 100 SMA is below the longer-term 200 SMA to indicate that the path of least resistance is to the downside. In other words, the selloff is more likely to continue than to reverse.

Stochastic is heading up, though, so sellers might still be taking a break to leave buyers to take over. A move past the channel resistance could still encounter roadblocks at the 100 SMA and 200 SMA dynamic inflection points. RSI has more room to climb, signaling that bullish pressure could stay in play for much longer. 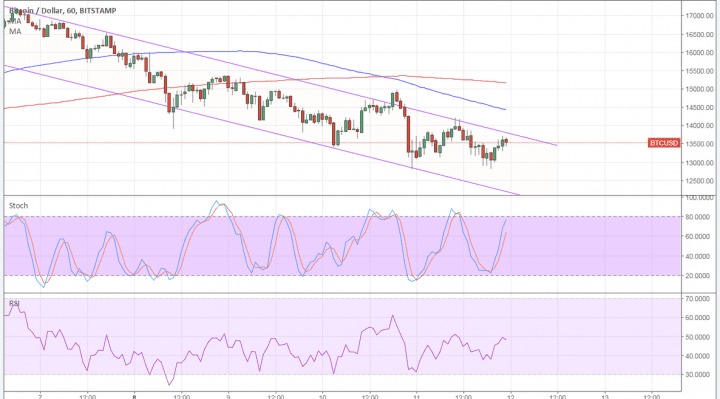 However, bitcoin is under pressure after South Korea announced its plans to ban bitcoin trading in the country. This is the current largest market for bitcoin so a ban would mean a huge dent on activity and demand, likely weighing on price as well.

“There are great concerns regarding virtual currencies and the justice ministry is basically preparing a bill to ban cryptocurrency trading through exchanges,” Justice minister Park Sang-ki told a news conference.

Then again, many believe that a ban would not be enough to quash activity in South Korea altogether as traders could adopt similar approaches to investors in China. It’s also worth noting that China itself announced a shutdown of several bitcoin mining operations, which caused mining fees to surge.

“Some of our long-term hosting partners are facing a crisis of farm closure as mining resources in mainland China become more scarce, leading to rocketing costs of our cloud mining operation,” the statement of ViaBTC Technology Ltd, one of the largest bitcoin mining collectives, said. “To guarantee the long run of cloud mining, ViaBTC has no choice but have to readjust our maintenance fees.”