Bitcoin recently broke past its descending trend line on the 1-hour time frame and is pulling back for a retest. The broken resistance appears to be holding as support and using the Fibonacci extension tool shows the next upside targets.

Price is currently testing the 38.2% extension near $13,700 and the 100 SMA dynamic inflection point. This short-term moving average is below the longer-term 200 SMA to indicate that the path of least resistance is to the downside or that the selloff is more likely to continue than to reverse

Stochastic is also on the move down to indicate the presence of selling pressure. In that case, another test of the swing low or broken trend line could be in the cards. RSI, on the other hand, is heading up so bitcoin could follow suit.

The next resistance is at the 50% extension near $14,000 while the full extension is at $14,759.93. If price hits this area, a double bottom could form and signal that further gains are underway. This reversal formation would be around $1,750 tall so the resulting rally could be of the same height. 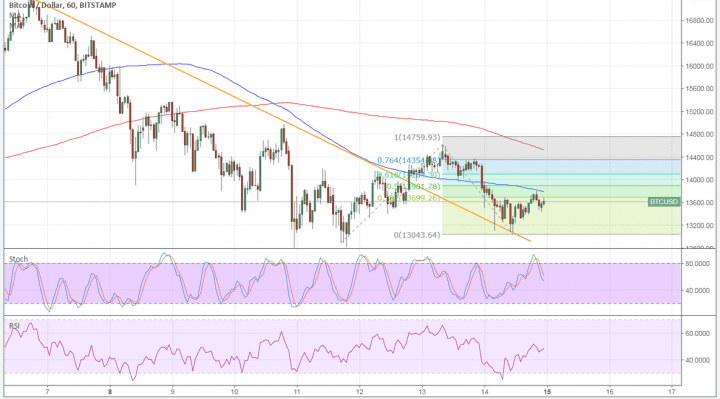 Dollar demand kicked into high gear on Friday as the earnings season started and data came in mostly stronger than expected. In particular, traders looked at the core CPI to revive Fed tightening expectations for the year.

Meanwhile, bitcoin was weighed down by the increase in interest for other altcoins. These are cheaper and offer higher potential returns, after all. Apart from that, news of crackdowns in China and South Korea continue to threaten trading volumes.

Looking ahead, there’s not much in the way of U.S. economic data but earnings reports could shore up equities to new record highs once again, thereby gaining more investor interest away from bitcoin. Then again, a return in risk aversion or a pickup in investor interest could still come around.