Bitcoin continues to suffer selling pressure and is currently down to the bottom of its descending channel on the 1-hour chart. A bounce could still take it back to the resistance around $14,250 or the mid-channel area of interest at $13,500.

Stochastic is indicating oversold conditions and is pulling up to show that sellers might need to take a break. RSI hasn’t quite reached oversold levels yet but is also turning higher to show a pickup in buying pressure.

However, the 100 SMA remains below the longer-term 200 SMA to confirm that the path of least resistance is to the downside. This means that support is more likely to break than to hold. In that case, bitcoin could stage a steeper drop.

Then again, the gap between the moving averages is narrowing to signal slowing bearish momentum. An upward crossover could even be possible and draw buyers back to the mix. 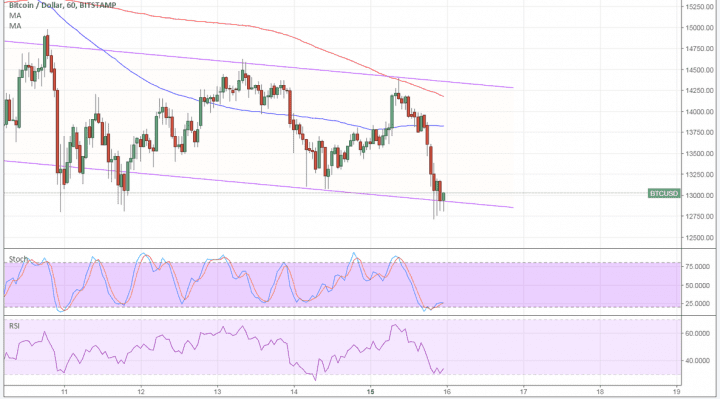 Still, there is significant downside pressure for bitcoin owing to South Korea’s plans to curb trading. As it turned out, officials are trying to remove anonymity in transactions. In China, bitcoin mining is being shut down by authorities as well.

Analysts still believe that South Korea won’t be imposing a full bitcoin ban, though. One of the latest statements from the Office for Government Policy Coordination indicated:

“The proposed shutdown of exchanges that the justice minister recently mentioned is one of the measures suggested by the justice ministry to curb speculation. A government-wide decision will be made in the future after sufficient consultation and coordination of opinions.”

Meanwhile the dollar is on weak footing against most of its peers, not just on weaker inflation and tightening expectations but also on risk-taking. Traders appear more willing to put funds in higher-yielding assets like equities and commodities, and these are also taking investor interest away from bitcoin.

Looking ahead, market sentiment could continue to dictate bitcoin direction. The earnings season in the US is in full swing and strong numbers could keep buoying equities higher, which would then attract more investor interest.