Bitcoin crashed through a key support zone in recent sessions, reaching support at the $10,000 mark. Bulls seem to be buying at this level so price could be due for a pullback to the nearby areas of interest.

Stochastic is already hovering around oversold levels, which suggests that selling pressure could fade. RSI is also heading lower but also dipping into oversold territory, likely drawing buyers back in.

The 100 SMA is below the longer-term 200 SMA so the path of least resistance is to the downside. In other words, the selloff is more likely to resume than to reverse. The 100 SMA is close to the 61.8% Fib while the 200 SMA is just below the channel resistance. 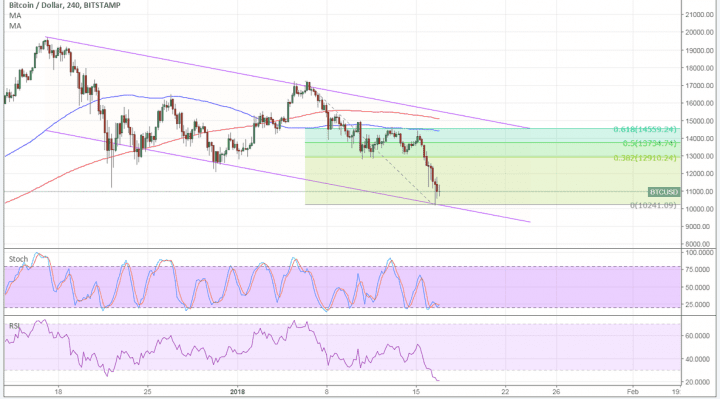 The sharp selloff has been blamed on persistent concerns about the ongoing crackdown in bitcoin mining in China and trading in South Korea. The latter is currently the top market for bitcoin, so a drop in transactions would mean lower global volumes and activity.

Recall, however, that this phenomenon also happened in China early last year but increased regulation didn’t seem enough to quash activity overall. Other markets such as India could emerge, on top of the growing demand for bitcoin in Japan and European countries.

Besides, the dollar is on very weak footing in the forex market on concerns about a US government shutdown and fading euphoria for tax reform. Not even upbeat earnings figures were enough to buoy equity indices in yesterday’s New York session and the dollar tanked on weaker optimism as well.

Updates on South Korea’s and China’s crackdown on bitcoin activity could continue to influence price action in the days ahead.