Bitcoin seems to have finished its correction as it formed a reversal candlestick upon testing the daily rising trend line. This is close to a Fibonacci retracement level that’s holding as support as well.

The 100 SMA is above the longer-term 200 SMA on the daily chart so the path of least resistance is to the upside. This means that the uptrend is more likely to resume than to reverse. The gap between the moving averages is also widening to reflect stronger bullish momentum.

The 100 SMA also lined up with the rising trend line to add to its strength as support. Stochastic is pulling up from oversold levels to signal a return in bullish momentum. RSI has room to fall, though, so it may be a while before buying picks up and the rally resumes. 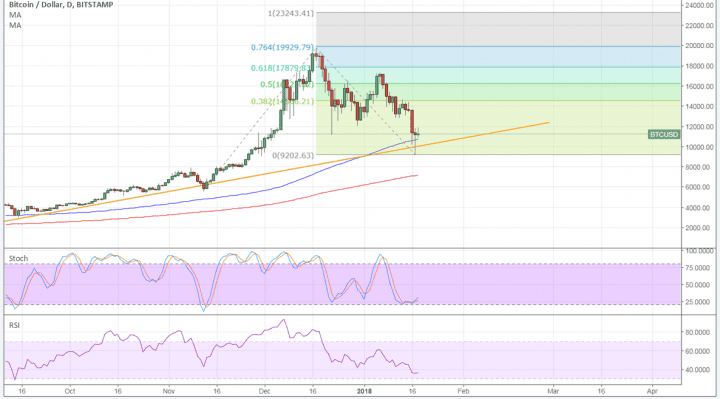 Buyers seem to be hopping in at cheaper levels as the $10,000 major psychological barrier is being tested. If this keeps losses in check, bitcoin could be able to resume its climb to the swing high and beyond. A break below the trend line, however, could lead to a larger correction to the 200 SMA dynamic inflection point closer to $7,000.

Fears of the crackdown in China and South Korea negatively influencing volumes and global activity was seen as the main culprit for the slide, which drew more and more sellers in. Other analysts blamed the deeply overbought market and see the recent pullback as mere reversion to the mean.