Bitcoin continues to trend lower on its short-term time frame and appears to be hitting a road block at the falling trend line. If this keeps gains in check, price could head down to the Fib extension levels next.

The 100 SMA is below the longer-term 200 SMA to signal that the path of least resistance is to the downside. In other words, this selloff is more likely to continue than to reverse. The moving averages are also close to the trend line resistance, adding to its strength as a ceiling in the event of another pullback.

Stochastic is on the move down, also confirming that sellers are on top of their game. RSI has more room to fall, so bitcoin might follow suit. 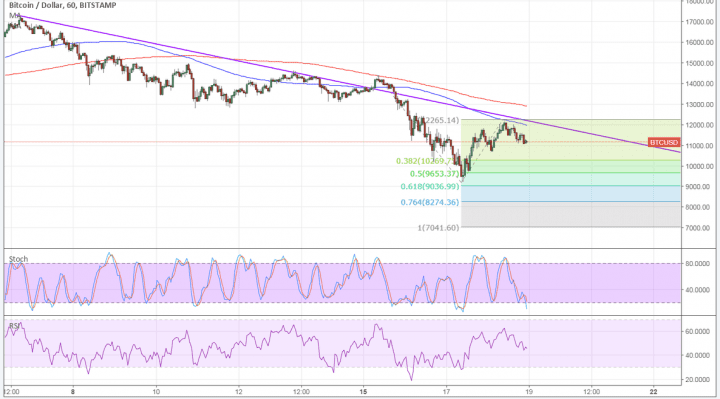 Bitcoin continues to reel from the recent selloff that was seen to be spurred by jitters surrounding the ongoing crackdown in China and South Korea. This could take a heavy toll on global volumes and activity, and the drop below tech levels earlier in the week likely drew more investors to liquidate their positions.

Analysts also remarked that bitcoin has been deeply overbought, so this correction might simply draw more buyers in. However, there might need to be significantly strong catalyst to allow the longer-term uptrend to resume. Note that longer-term trend lines and inflection points are able to keep losses at bay for now.

Besides, the dollar is in a weak spot as the US government faces a potential shutdown if Congress fails to approve the funding bill by the end of the week. This could lead to a pickup in geopolitical risk and risk aversion, which is often positive for bitcoin and other altcoins.