Bitcoin has recently broken below the support of its ascending channel on the 1-hour time frame to signal that a downtrend is underway. Price is now trading inside a descending channel and currently testing the resistance.

Price has also pulled back for a retest of the broken ascending channel support, which has been able to keep gains in check. This confirms that the selloff is gaining traction as the area of interest also lined up with the 100 SMA dynamic inflection point.

Speaking of moving averages, the 100 SMA is below the longer-term 200 SMA to confirm that the path of least resistance is to the downside. In other words, the downtrend is more likely to carry on than to reverse. In that case, bitcoin could fall all the way down to support around $11,000 or at least until the swing low closer to $12,000.

Stochastic hasn’t quite reached overbought levels yet but appears to be turning lower to signal that sellers are eager to hop in. RSI is also turning down without reaching the overbought region as well. 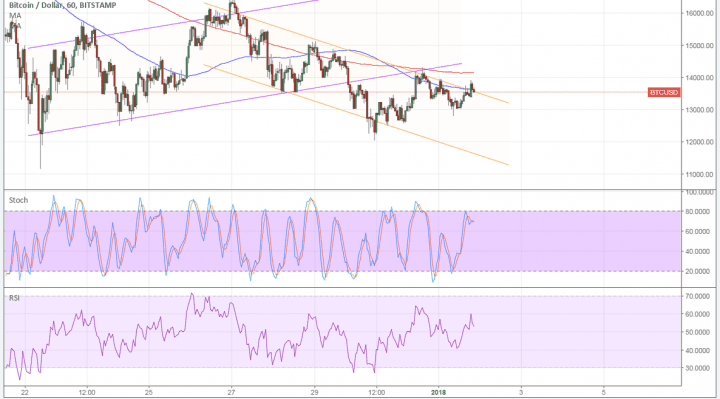 The US dollar is starting 2018 off on strong footing as the approval of the tax reform package would mean positive things for businesses and consumers. This could lead to a strong showing from US equities as markets reopen later today, likely boosting US bond yields and the dollar in effect.

Meanwhile, bitcoin is still reeling from reports that the South Korean government is moving to curb bitcoin activity in the country. This could keep a lid on volumes as the nation accounts for a huge chunk of overall market activity. Apart from that, there are fears that other countries might follow suit.

Still, the cryptocurrency could draw some support from network upgrades scheduled throughout the month and until March this year. This would likely leave the network more stable and able to handle more transactions than before, keeping bitcoin superior compared to its rivals.