Bitcoin was previously trading lower beneath a descending trend line but has since broken to the upside to signal a reversal. Applying the Fibonacci retracement tool on the breakout move shows that price is testing the 50% level that coincides with the broken trend line.

The 100 SMA is below the longer-term 200 SMA to signal that the path of least resistance is to the downside. However, the gap is narrowing to indicate weakening bearish momentum and a potential upward crossover.

Stochastic is also heading north, so price could follow suit. RSI has more room to climb, which suggests that bitcoin could make it up to the swing high around $13,000 if buyers stay in control. 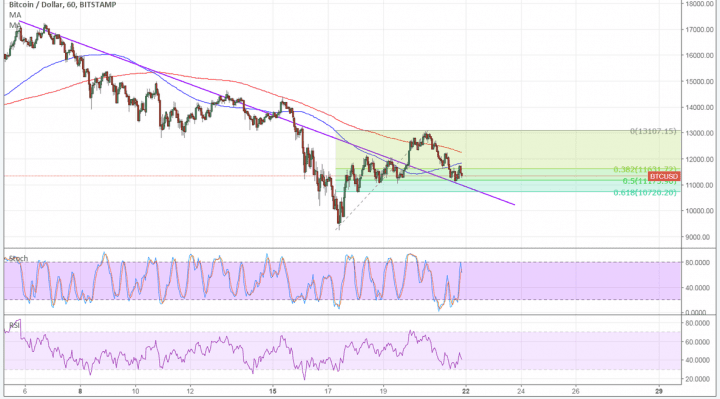 Bitcoin is regaining ground as fears of a full-blown crackdown in South Korea have abated. In fact, some Chinese exchanges like Huobi and OKCoin have been cleared to launch in South Korea and there are updates on bitcoin futures as well.

This could revive volumes and activity in the country that has accounted for majority of bitcoin transactions in the past months, outweighing the downside pressure in China and India.

Apart from that, the US government shutdown could both lead to dollar weakness and a pickup in bitcoin demand. After all, this would likely weigh on US stocks and bonds, leading investors to look for better returns elsewhere. Rising geopolitical risks tend to boost bitcoin price, along with other cryptocurrencies.

Over in the US, the SEC has listed reasons to be wary of listing cryptocurrency ETFs. The letter states:

“Until the questions identified above can be addressed satisfactorily, we do not believe that it is appropriate for fund sponsors to initiate registration of funds that intend to invest substantially in cryptocurrency and related products, and we have asked sponsors that have registration statements filed for such products to withdraw them.”