Bitcoin is back in its slump and testing the bottom of its falling wedge on the 4-hour time frame. A bounce could lead to another test of resistance while a break lower could mean a steeper selloff.

On longer-term time frames, it can be seen that bitcoin is trying to stay afloat with reversal candlesticks on inflection points. On this time frame, however, the 100 SMA is still below the longer-term 200 SMA to signal that the path of least resistance is to the downside.

The wedge is around $9,000 tall so the resulting selloff could be of the same height. RSI is pointing down to signal that selling pressure is present and a move below the lows could confirm that more losses are in the cards. However, stochastic is pulling up from oversold conditions to show that buyers are taking control. 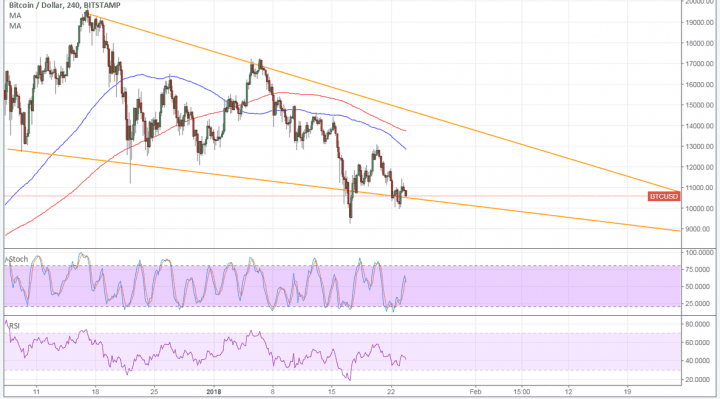 Bitcoin remains under pressure while traders hold out for a catalyst that could inspire a stronger bounce. The longer the selloff persists, more investors also start to liquidate their positions.

However, long-term support zones around $10,000 are currently holding as some buyers are taking this as an opportunity to invest in bitcoin at much cheaper levels. Dollar demand is also significantly weaker while risk-taking persists and Fed rate hike doubts remain in play.

Still, it’s worth noting that bitcoin is also generally lifted by risk-off flows while traders look for better returns outside of traditional markets. In the past few days, however, stocks and commodities have been performing well so it’s understandable that these assets are attracting money away from cryptocurrencies.

Volumes are still lower on most exchanges as traders are wary of the crackdown in China and South Korea. Earlier this week, authorities noted that they plan on lifting the veil of secrecy in bitcoin transactions, leading to liquidation among several holders.