Bitcoin has formed lower highs and higher lows on its 1-hour time frame, creating a symmetrical triangle pattern. Price is currently testing the resistance and could be due for another test of support soon.

The 100 SMA is below the longer-term 200 SMA to signal that the path of least resistance is to the downside. This means that the resistance is more likely to hold than to break. 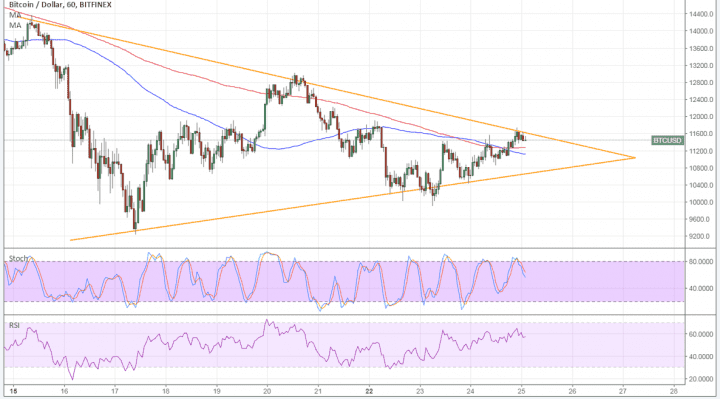 Bitcoin remains under pressure while traders are fixated on the crackdowns in South Korea, India, and China. It would take a strong bullish catalyst to allow the long-term climb to resume and be sustained.

Fortunately for BTCUSD, the dollar is also in a weak spot. Apart from downbeat medium-tier reports, remarks from Treasury Mnuchin on how a weak dollar could be good for trade drove the currency much lower. The dollar has been breaking one technical level after another, drawing even more sellers to the mix.

As for bitcoin, a return in geopolitical risk could be one of the factors that draw investors back in. Fears of a trade war between the US and China could be enough to usher in some gains for bitcoin, on top of the strong bullish defense around the $10,000 major psychological level.

There are no major economic reports from the US apart from the advance GDP later on next so market sentiment could come in play. In particular, risk aversion could be positive for cryptocurrencies as this has been the case in the past. Besides, with weak market appetite for dollars could leave traders looking for alternatives.