Bitcoin could be prime for a short-term rally as price is forming a double bottom on its 4-hour time frame. Price failed in its last attempts to break below $10,000 but has yet to climb past the neckline at $13,000 to confirm the potential rally.

The 100 SMA is still below the longer-term 200 SMA, though, so the path of least resistance is to the downside. This suggests that the selloff is more likely to resume than to reverse. In addition, the gap between the moving averages is widening to reflect stronger selling pressure.

RSI is on the move up to indicate that there’s still some buying pressure left. Stochastic is also heading north so bitcoin might follow suit. However, selling pressure could return once both oscillators hit overbought levels and turn back down. The moving averages could hold as near-term resistance levels as well. 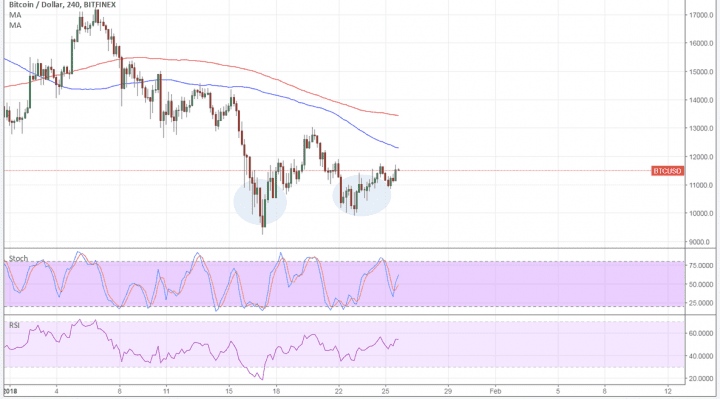 It looks like bitcoin traders are still holding out for stronger clues that the rallies would resume and be sustained. For now, concerns about the crackdown in South Korea and China have weighed on volumes and activity, keeping bitcoin moving sideways.

As for the dollar, it drew some support from Trump’s remarks on how the currency would get stronger. He also said that Mnuchin’s remarks on how a weak dollar would benefit trade were taken out of context. Data from the US has been mostly weaker than expected, though, so there are still doubts on the Fed’s tightening pace.

Today has the US advanced GDP report up for release and analysts are expecting to see a 3.0% growth figure. Stronger than expected results could revive dollar gains while weak data could continue to undermine its strength.

A pickup in geopolitical risk could drive traders back to bitcoin, and market participants are keeping tabs on North Korea’s actions to gauge if they are set to launch another missile test.