Bitcoin appears to be moving sideways these days, finding support at $13,000 and resistance around $16,000. The top of the range lines up with a former support level or area of interest.

Price looks ready for a test of the range resistance but is encountering a roadblock at the 100 SMA dynamic resistance. This short-term moving average is above the longer-term 200 SMA for now, but the gap has narrowed significantly and a downward crossover seems imminent.

In that case, bearish pressure could pick up and take bitcoin back down to support. Stronger selling momentum could even lead to a downside break and a drop of the same height as the former range.

Stochastic is on the move up to indicate the presence of bullish momentum, though, while RSI also has room to climb. These suggest that a test of the support-turned-resistance might happen before sellers return. 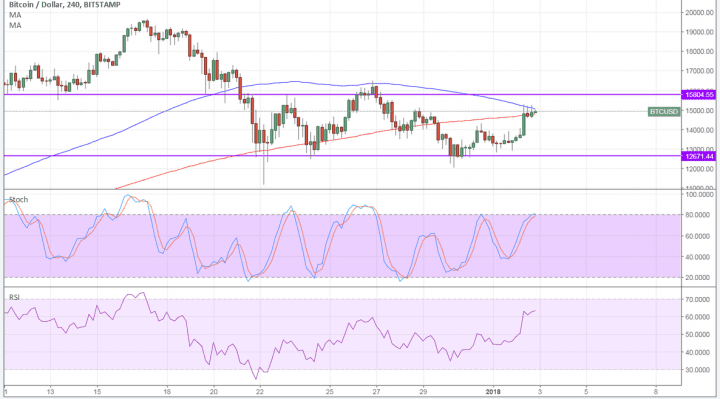 Dollar weakness resumed at the start of the year, same as it was when 2017 came to a close. Doubts about the Fed’s tightening pace for the year, owing to weaker inflation forecasts, are still in play and it might be up to the NFP release to reassure dollar bulls.

Stronger than expected jobs data and earnings figures could lead to a recovery for the US currency, especially since the tax reform package is also widely expected to shore up growth. On the other hand, disappointing results could mean more dollar weakness and perhaps an upside break for bitcoin in this range.

Bitcoin is under some selling pressure, too, due to South Korea’s efforts to regulate bitcoin transactions. This has curbed activity in one of the top markets for the cryptocurrency and has hurt volumes, even after the launch of bitcoin futures on CBOE and CME led to a boost in demand earlier on.

Looking ahead, bitcoin has a few network upgrades lined up and traders are keeping close tabs on how it impacts rivals like Bitcoin Cash and Bitcoin Gold.