Bitcoin is still consolidating at the middle of its descending channel on the 4-hour time frame but trading above a short-term rising trend line. Price is testing this support zone and a break lower could open the path towards the channel support around $6,000.

On the other hand, a bounce off this short-term support could lead to a test of the channel resistance at $12,000-13,000. The 100 SMA is below the longer-term 200 SMA, though, so the path of least resistance is to the downside. This suggests that the resistance is more likely to hold than to break.

The gap between the moving averages is also widening to reflect stronger selling pressure. In addition, the 100 SMA appears to have held as dynamic resistance on the latest bounce. The 200 SMA is closer to the top of the channel and could add an extra upside barrier.

Stochastic is indicating oversold conditions, though, which means that sellers are feeling exhausted and could let buyers take over. RSI has more room to fall so bears could stay in control for a bit longer. 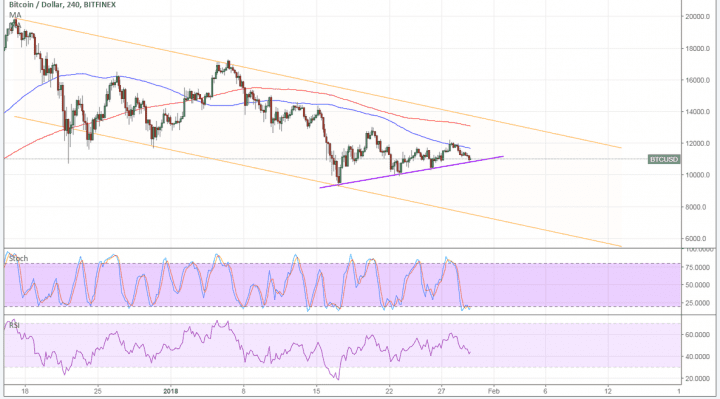 The US dollar drew support from both risk aversion and a pickup in Fed tightening expectations. This could keep a lid on consumer and business activity across the globe, which would also mean slower gains for equities and commodities.

Traders might also be booking profits ahead of the FOMC decision, even though the central bank isn’t really expected to announce changes to interest rates for now. The upcoming NFP release on Friday could also shape rate hike expectations for the coming months and lead to huge swings for the dollar.

Meanwhile, bitcoin is under pressure from ongoing crackdowns on trading and mining activity. The lack of positive catalysts and the persistence of declines is also making it more difficult for the cryptocurrency to recover. It doesn’t help that analysts are chiming in to say that other altcoins like Ripple or Ethereum are superior to bitcoin.