Bitcoin price recently broke below its symmetrical triangle consolidation pattern on the 1-hour time frame, indicating that bears are regaining ground. The chart pattern spans $9,500 to $13,000 so the resulting selloff could be of the same height.

The 100 SMA is above the longer-term 200 SMA so the path of least resistance is to the upside. This suggests that a pullback might still be possible before bitcoin heads any lower. The gap between the moving averages is still narrow, though, so a downward crossover might be due soon. 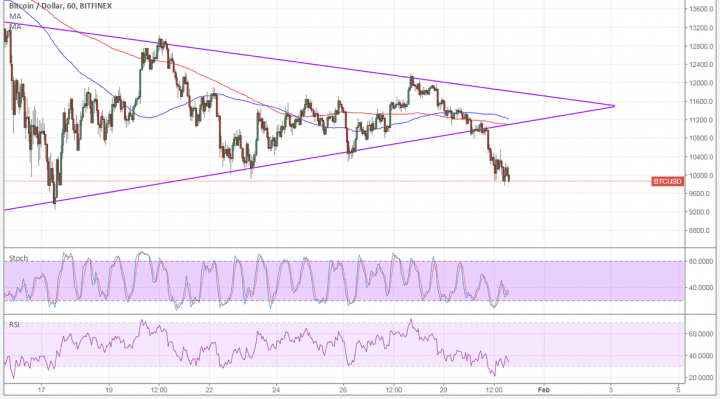 Profit-taking has been blamed for the recent moves in financial markets at the end of the month as traders also prep for the potential event risks from the State of the Union address, FOMC decision and NFP report. Hawkish remarks from the Fed officials, coupled with upbeat NFP results, could mean more gains for the dollar versus bitcoin.

On the other hand, doubts about the Fed’s tightening plans this year could still mean losses for the dollar, especially since traders are still wary of weak inflation. There have been some remarks against dollar strength that led to a selloff for the currency last week, as well as fears of a trade war with China.

As for bitcoin itself, the mood in the cryptocurrency market is still a somber one while traders wait for a strong positive catalyst. By the looks of it, many are still being led to liquidate due to jitters about the crackdown in several countries and a hack in Coincheck that led to its shutdown.