Bitcoin looks ready to resume its climb as it found support at the bottom of its ascending channel on the 1-hour time frame. This lines up with the 61.8% Fibonacci retracement level and may be the line in the sand on this uptrend.

The 100 SMA is still above the longer-term 200 SMA to confirm that the path of least resistance is to the upside. In other words, the uptrend is more likely to resume than to reverse. The 200 SMA appears to be holding as dynamic support as well.

Stochastic is heading north but is currently in overbought territory, which can be indicative of bullish exhaustion. In that case, bitcoin could pull back to the channel support before gaining more traction on its climb. RSI has plenty of room to rise, which suggests that bulls could stay in control for a bit longer.

If so, bitcoin could make it up to the swing high near the $17,000 handle or even until the top of the channel at $18,000. Stronger bullish momentum could enable the cryptocurrency to retest its all-time highs closer to $20,000. 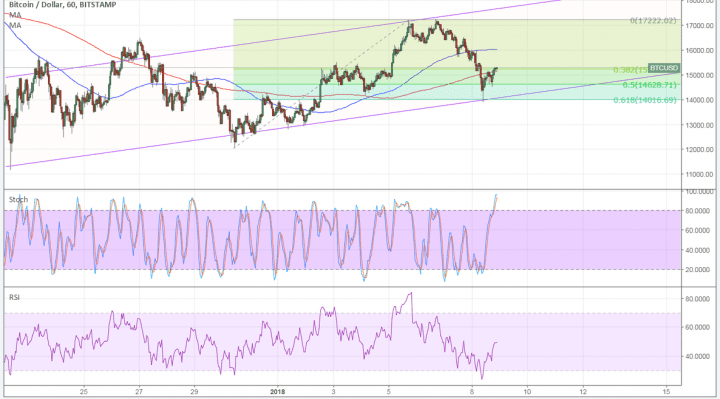 However, dollar demand is putting up a fight as economic reports and expectations for tax reform continue to prop US assets higher. Although the NFP report disappointed, traders remain hopeful for more hikes in 2018, and the upcoming top-tier data this week could make or break these forecasts.

The CPI and retail sales figures are lined up for Friday, and the consumer credit report has hinted at stronger spending data. However, the attention could be fixed on inflation data as policymakers have recently pared their hopes for seeing annual CPI hit the 2% target anytime soon. Some Fed officials have already cited that they might hesitate to vote for hikes until they see inflation hitting the target.

As for bitcoin, the cryptocurrency is under pressure from the withdrawal of several ETF proposals for fear of stricter SEC regulation. This undermined market demand stemming from the launch of bitcoin futures recently.