Bitcoin has broken past the neckline of a double bottom reversal pattern on the 1-hour time frame to signal that a rally may be due. Price is consolidating after hitting resistance around $6,500 so a pullback may be due.

Applying the Fibonacci retracement tool on the latest swing low and high shows that the 50% level is close to the broken neckline resistance that might now serve as support. This is also in line with the dynamic inflection points at the moving averages.

The 100 SMA is just crossing above the longer-term 200 SMA to confirm that the path of least resistance is to the upside. This means that the uptrend is more likely to be sustained than reversed. Still, a break below the Fibs could lead to a drop to the lows near $5,800 or lower.

RSI is still heading south so bitcoin could follow suit while sellers have the upper hand. Stochastic is also heading lower to reflect the presence of bearish momentum. If any of the Fibs keep losses at bay, though, price could move back to the swing high and beyond. 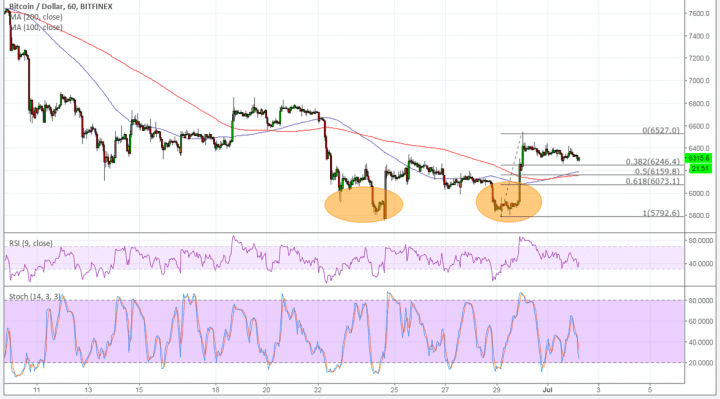 Bitcoin and its peers are off to a positive start for the month and quarter, possibly as a result of profit-taking from earlier declines. It’s normal that investor sentiment is upbeat on a new week as many hope that industry updates could turn out better from here on.

Meanwhile, dollar traders might also be reducing their long positions leading up to this week’s NFP release. Downbeat results could dampen tightening expectations for the rest of the year while another set of strong figures could keep hopes up for two more hikes. The FOMC minutes are also on this week’s docket, so it could be a volatile one for the dollar.

To top it off, the usual slew of trade-related headlines could impact overall sentiment in the financial markets, influencing demand for riskier assets like bitcoin as well.