Bitcoin is still consolidating in a short-term symmetrical triangle as it hovers around the top of the ascending channel. Price is still waiting for more bullish momentum to kick in before attempting to break higher.

The 100 SMA is still safely above the longer-term 200 SMA to confirm that the path of least resistance is to the upside. In other words, the uptrend is more likely to resume than to reverse. The 100 SMA is holding as dynamic support for now also.

However, a break below the triangle consolidation could lead to a correction to the nearby support levels. Buyers could be waiting around the mid-channel area of interest around $7,800 or the very bottom of the channel at $7,300. This is also near the 200 SMA dynamic inflection point, which might be the line in the sand for this climb.

RSI is still treading sideways to signal consolidation but appears to be slowly moving south. This could mean a steady build in selling pressure from here. On the other hand, stochastic is pointing back up to suggest that buyers are ready to return without even seeing oversold conditions. 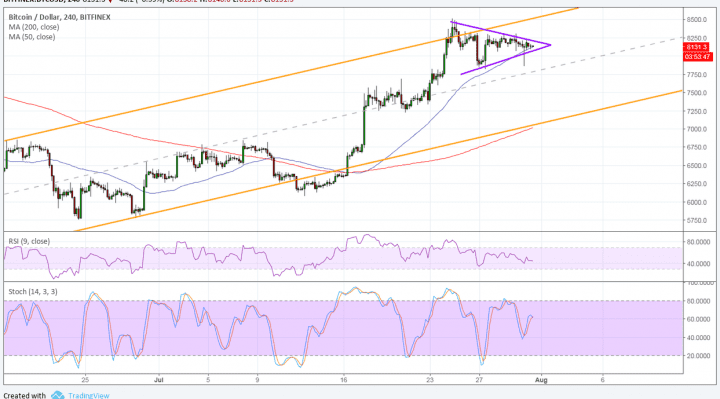 Bitcoin has had a tough time extending its strong rallies in the absence of another set of positive catalysts to prop it higher. The past weeks found support in increased institutional interest but buyers seem to have hit the pause button when the SEC shelved their decision on a handful of bitcoin ETFs for a later date.

With that, the cryptocurrency is on the hunt for more reasons to move any higher. So far, the only newsworthy pieces have been the results of a recent Gallup poll indicating that retail investors are interested in the space but only 2% actually own bitcoin for now.

Meanwhile, the dollar is also getting its share of the spotlight with the FOMC decision coming up and the NFP report also up for release later in the week.