Bitcoin has formed higher lows and higher highs to create a rising wedge formation on its 1-hour chart. Price is currently testing support and a bounce could take it back to the top.

The 100 SMA dynamic support lines up with the bottom of the wedge to add to its strength as a floor. This moving average is also above the longer-term 200 SMA to indicate that the path of least resistance is to the upside. In other words, support is more likely to hold than to break.

At the same time, RSI is starting to climb out of the oversold region to signal that buyers are returning while sellers take a break. Stochastic is pulling up from overbought territory to reflect a pickup in buying pressure. In that case, bitcoin could recover to the top of the wedge around $6,800 to $7,000.

The chart pattern spans roughly $1,000 in height so a break past the wedge resistance could spur a rally of the same height while a move below support could lead to a drop of the same size. 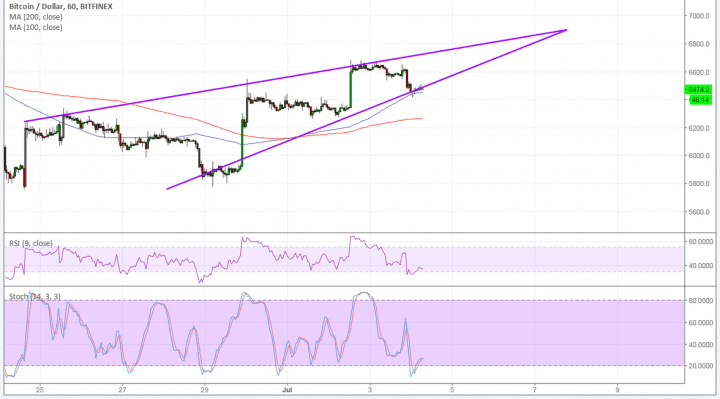 Bitcoin appears to be taking risk-on flows away from stocks and commodities these days, as traditional assets are being weighed down by trade war concerns. After all, escalation of retaliatory measures could bring more uncertainty and losses to businesses.

Cryptocurrencies, on the other hand, could be immune to these risks. So far, there have also been no negative updates in the industry, particularly those pertaining to hacks or regulation. This keeps investors optimistic that the industry could turn a corner this second half of the year and possibly even hit the estimates at $20,000 to $50,000 by the end of the 2018.

The US dollar could also be on the back foot as it faces a couple of event risks this week, namely the FOMC minutes and NFP release. US traders are enjoying the Fourth of July holidays as well, so liquidity could be thinner.