Bitcoin has formed higher lows and higher highs on its 1-hour chart to trade inside an ascending channel pattern. Price just bounced off the top to signal that another pullback to support might be due.

This lines up with a former resistance around $6,600 which might hold as support from here. It is also in line with the 100 SMA dynamic inflection point, which is above the longer-term 200 SMA to confirm that the path of least resistance is to the upside. The 200 SMA is closer to the channel support and might be the line in the sand for this short-term climb.

The gap between the moving averages is narrowing, however, hinting at a slowdown in bullish momentum. If a crossover materializes, bearish momentum could kick in and spur a drop from the channel support.

RSI is turning higher, though, so bitcoin could follow suit while buyers regain control. Stochastic is also starting to turn higher without even hitting oversold levels, signaling that buyers are eager to return and spur a test of the channel top around $7,000. 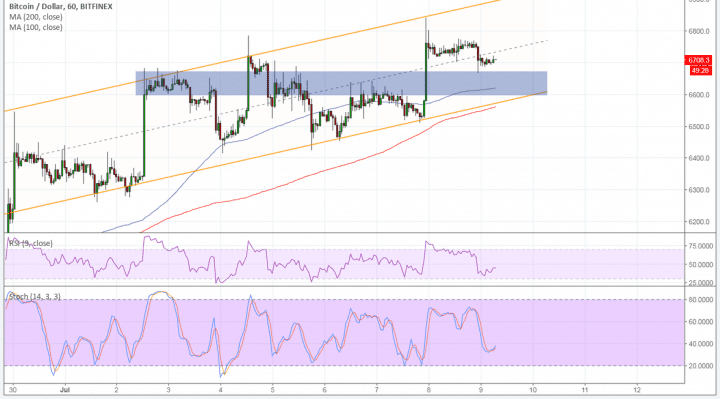 Bitcoin could continue its recover from here as the previous week was able to pull of a positive finish. Many attributed this to a dead-cat bounce or profit-taking but the sustained rallies suggest otherwise. It may also be a result of the lack of negative industry updates over the past few days, which paved the way for an optimistic start for the quarter.

Looking ahead, investors could continue to keep a lookout for any headlines on regulation or security incidents to gauge if the uptrend could be sustained. So far, it looks like news that government and companies continue to warm up to blockchain technology are also being positive for cryptocurrency prices.

Meanwhile, the dollar has taken hits from trade troubles and a mixed FOMC tone but has also proven to be resilient. US CPI is lined up this week.