Bitcoin is at the very bottom of its longer-term descending triangle and a bounce or break could determine its next trend. If support holds, bitcoin could still hit resistance at the top of the formation near the Fibonacci retracement levels.

In particular, the 61.8% retracement level is closest to the triangle top around $7,350. The 38.2% level could hold in a shallow pullback as this coincides with a previous swing low.

The 100 SMA is below the longer-term 200 SMA to indicate that the path of least resistance is to the downside. In other words, support is more likely to break than to hold. Also, the 100 SMA lines up with the triangle top to add to its strength as resistance.

Stochastic is already indicating oversold conditions and might be ready to pull up. In that case, bullish momentum could return and sustain a climb. A move past the top of the triangle could still hit a roadblock at the swing high or 200 SMA dynamic inflection point.

RSI is also indicating oversold conditions but doesn’t look ready for a move back up just yet. This suggests that sellers could stay in the game for a bit longer before buyers return. 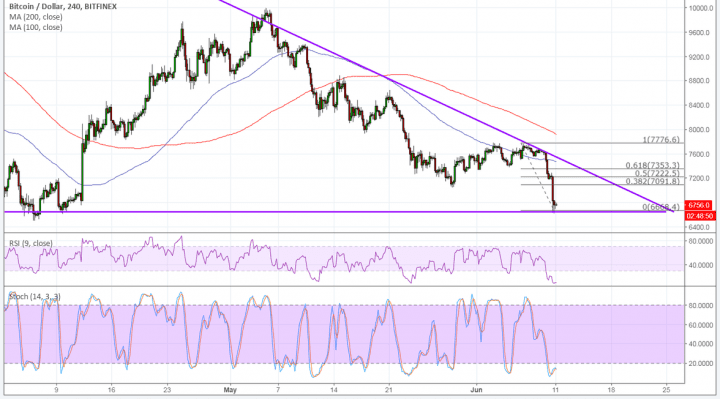 Bitcoin was off to a rough start since it was reported that a small South Korean exchange called Coinrail was recently hacked. As it tweeted over the weekend, only lesser-known altcoins like Pundi X were affected, but investors couldn’t help but worry about security issues weighing on the industry.

Also, it’s worth noting that US regulators are in the middle of a probe on price manipulation for cryptocurrencies. If results confirm that this has been the case for so long, more investors could lose trust in bitcoin and other altcoins. As for the dollar, the FOMC decision is the main event risk as traders strongly anticipate a rate hike.