Bitcoin looks prime for a pullback as it tests the bottom of its descending channel visible on the 1-hour chart. Applying the Fibonacci retracement tool shows the next potential resistance levels.

The 61.8% Fibonacci retracement level lines up with the channel resistance and a former support zone around $7,300. This also coincides with the 100 SMA dynamic inflection point, which is below the longer-term 200 SMA to signal that the path of least resistance is to the downside. This means that the selloff is more likely to resume than to reverse. The 200 SMA is closer to the channel resistance to add as another layer of defense.

RSI is heading higher to signal that buyers have the upper hand. However, this oscillator is approaching overbought conditions, which means that buyers need to take a break soon and might let sellers take control. Stochastic is already turning lower from the overbought territory to confirm that some selling pressure is already kicking in. In that case, bitcoin could revisit the swing low or make move closer to the channel support. 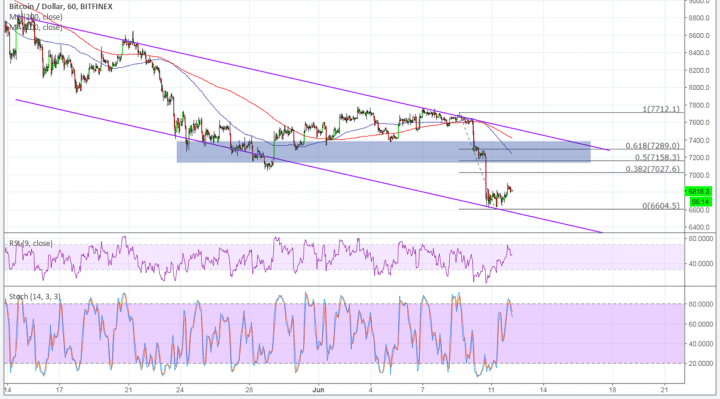 Bitcoin continues to be weighed down by news of the hack on a small South Korean exchange. Although this only affected lesser-known altcoins and bitcoin holdings weren’t stolen, investors can’t help but worry that security issues are still prevalent in the industry.

The dollar could find support from the CPI report due today as strong figures could underscore prospects of more rate hikes later this year. The FOMC is scheduled to meet on Wednesday and announce a 0.25% rate hike, and the tone of their statement could determine if tightening could proceed at the same pace.

Apart from that, overall market sentiment could dictate where bitcoin is headed next. Note that the digital currency is also down to the last floor on its triangle consolidation pattern on the long-term chart, so a breakdown could set off more declines.