Bitcoin looks set to proceed with its selloff as price has tumbled below the mid-channel area of interest on the descending channel. This paves the way for a move all the way down to the bottom at $6,000.

The 100 SMA is below the longer-term 200 SMA to indicate that the path of least resistance is to the downside. In other words, the selloff is more likely to resume than to reverse. In addition, the 100 SMA lines up with the channel resistance at $7,200 to add to its strength as a ceiling in the event of a pullback.

However, the gap between the moving averages is narrowing to signal a potential upward crossover. If completed, buyers could jump back in and push for a reversal, although it would need to move past the 200 SMA dynamic inflection point to sustain a climb.

RSI is pulling up from oversold territory to signal a return in bullish pressure. A bit of bullish divergence can also be seen as price made lower lows while the oscillator had higher lows since May 23. Stochastic is also heading up from oversold levels so bitcoin might follow suit. 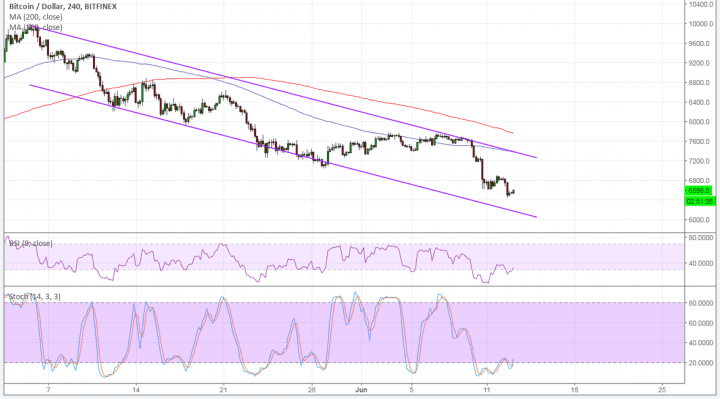 Cryptocurrencies are still under some selling pressure owing the ongoing investigation by US regulators into price manipulation of bitcoin, ethereum, and the like. The results could undermine confidence in the industry, especially as a hack on a small South Korean exchange was reported over the weekend.

As for the dollar, the upcoming FOMC decision is keeping it propped up on rate hike expectations. Prior to this, the CPI report had some upside surprises so the Fed might maintain its pace of tightening instead of slowing down. In any case, policymakers have emphasized the need to adjust their forward guidance so there could be big changes in rhetoric that could push BTCUSD around in the next few hours.