Bitcoin made a strong bullish break past a short-term falling trend line as an early signal of a potential climb. However, technical indicators on this same time frame suggest that the downtrend is more likely to resume than to reverse.

In particular, the 100 SMA is still below the longer-term 200 SMA to indicate that the path of least resistance is to the downside. This means that bearish momentum is still in play and the moving averages might hold as dynamic resistance around $6,700 and $7,200. The gap between the two is also widening to reflect stronger selling pressure.

RSI is still moving up to the overbought region but looks ready turn back down again. This would reflect a return in selling momentum that might take bitcoin back below the trend line. Stochastic is also heading up to reflect some bullish momentum but is also dipping into overbought territory to reflect exhaustion among buyers. 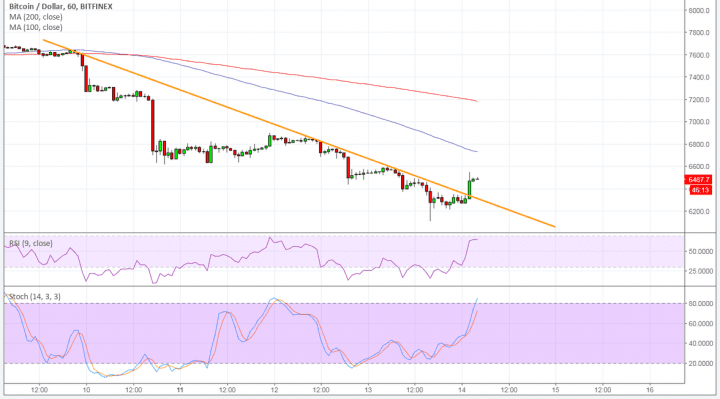 The brief rally in bitcoin was likely spurred by dollar weakness across the board after the FOMC decision. The Fed hiked rates by 0.25% as expected and even signaled room for two more hikes this year, an upgrade from their earlier prediction of just one more hike.

Trade war fears still seem to be dampening demand for the dollar as policymakers highlighted this concern in their statement. Also, the Trump administration is reportedly gearing up to implement higher tariffs on Chinese goods by Friday since Beijing hasn’t done anything to trim their trade surplus lately.

Meanwhile, bitcoin and its altcoin peers remain under pressure while the investigation by US regulators into price manipulation is ongoing. There has been some evidence that Tether was used to manipulate bitcoin price in 2017 and confirmation from their probe could further erode trust in cryptocurrencies, thereby leading to more bitcoin losses.