Bitcoin is bouncing off support around the $6,500 level as a bullish divergence can be seen. Stochastic made higher lows while price had lower lows since the start of the month, adding confirmation that bulls could return.

However, the 100 SMA is still below the 200 SMA to indicate that the path of least resistance is to the downside. In other words, the selloff is more likely to continue than to reverse. The gap between the two moving averages is also widening to reflect stronger selling pressure and these could serve as dynamic inflection points on a move to $8,000 then $10,000.

RSI is also pulling up from oversold levels to signal a potential return in buying pressure while sellers take a break. 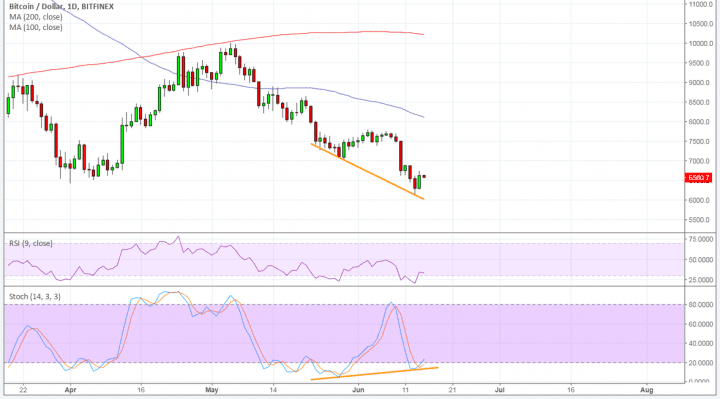 Bitcoin drew support from remarks by an SEC official citing that it is not a security that is subject to similar regulation for stocks or bonds. According to SEC Corporation Finance Director William Hinman in a San Francisco conference:

Based on my understanding of the present state of ether, the Ethereum network and its decentralized structure, current offers and sales of ether are not securities transactions.

He also mentioned that bitcoin shouldn’t be treated as a security either, easing regulatory fears weighing on the industry for the past weeks. Still, investors are wary about the outcome of the ongoing probes into price manipulation as evidence supporting such would undermine trust in the industry.

Over time, there may be other sufficiently decentralized networks and systems where regulating the tokens or coins that function on them as securities may not be required.

With that, cryptocurrencies could be in for a relief rally after weeks of selling off, although concerns looming over the industry could continue to keep a lid on gains for the time being.