Bitcoin is currently consolidating inside a symmetrical triangle pattern on the 1-hour time frame and testing support. A bounce could take it up to the triangle resistance at $6,500.

Stronger bullish momentum could spur an upside break from the triangle top, but the 100 SMA dynamic inflection point is reinforcing that ceiling. Speaking of moving averages, the 100 SMA is below the longer-term 200 SMA to indicate that the path of least resistance is to the downside. This means that support is more likely to break than to hold.

A break below the $6,400 support level could set off a drop that’s the same height as the chart formation. This spans $6,200 to $6,800 so the resulting move could be $600 tall. Similarly, a break past the triangle top could spur a rally of the same size, although price would need to bust through the 200 SMA dynamic inflection point to sustain that.

RSI is starting to turn higher, indicating a return in bullish momentum. Stochastic has crossed up as well and could pull up soon, bringing bitcoin along with it. 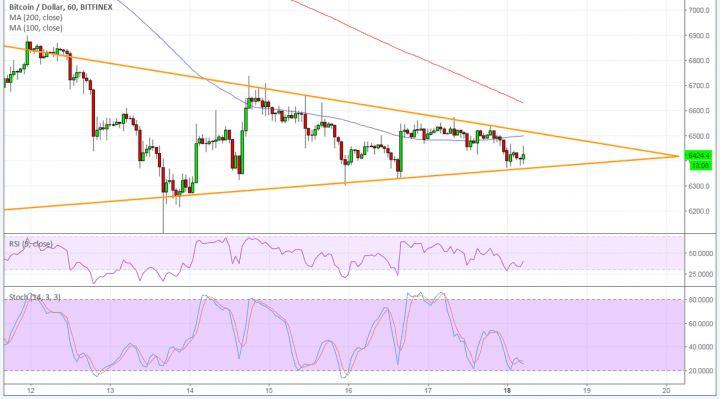 However, dollar demand remains supported by safe-haven flows on account of trade war concerns. Last week, the Trump administration levied higher tariffs on $25B worth of Chinese goods, then China responded with retaliatory measures on US exports. This could wind up being damaging for global growth, which could then drive up demand for the safe-haven dollar.

Keep in mind that the FOMC has recently hiked interest rates and signaled room for two more tightening moves later this year. After all, growth and inflation estimates have improved, although trade activity poses uncertainty.

Besides, bitcoin is being dragged lower by the ongoing investigation into price manipulation. Results confirming that this was the case for 2017 could further undermine trust and confidence in the industry, possibly leading to a downside break and steeper drop for bitcoin.