Bitcoin broke above the neckline of its complex inverse head and shoulders pattern to signal that bullish momentum is returning. Price also formed a small bullish flag, which is typically considered a continuation signal.

The 100 SMA is below the longer-term 200 SMA for now, but the gap is narrowing to show that a bullish crossover is imminent. Once it happens, bullish pressure could kick in and lead to an upside break from the flag.

However, RSI is turning lower from the overbought region to indicate that buyers are tired and might let sellers take over. In that case, bitcoin could still pull back to the broken neckline around $6,500 before sustaining the climb. This broken resistance lines up with the moving averages’ dynamic inflection points also.

Stochastic also looks ready to head south to reflect a return in selling pressure without hitting overbought conditions. Stronger selling momentum could lead to a test of support closer to $6,200. 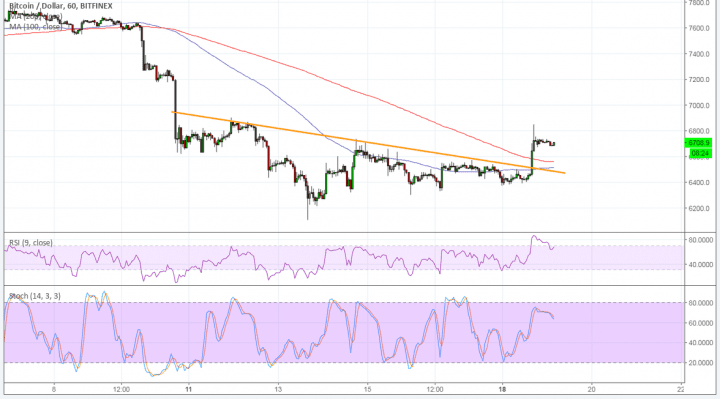 Bitcoin got a boost from news that the New York Financial Services Authority granted a license to Square’s Cash mobile app, which could allow clients to trade bitcoin in the state. This represents a step in the right direction in terms of regulation, also signaling potentially stronger volumes and higher liquidity as Cash has 7 million active users based on its quarterly report.

Apart from that, the dollar is on weak footing owing to another round of tariff threats from the Trump administration to China. Trump reportedly asked the US trade representative to look into $250 billion worth of Chinese goods to slap 10% tariffs on.

Escalating trade tensions could wind up hurting the US economy most as retaliatory measures are weighing on business sentiment and investment. In contrast, alternative assets could take the share of safe-haven gains while stocks and commodities take hits.