Bitcoin is still trending lower in a descending channel on its 4-hour time frame but could be due for more gains as it bounced off the long-term floor. A break past the channel top at the $7,000 level could be enough to confirm that bulls have the upper hand.

However, the 100 SMA is still below the longer-term 200 SMA to indicate that the path of least resistance is to the downside. In other words, the selloff is more likely to resume than to reverse from here. The shorter-term moving average also lines up with the channel resistance to add to its strength as a ceiling. 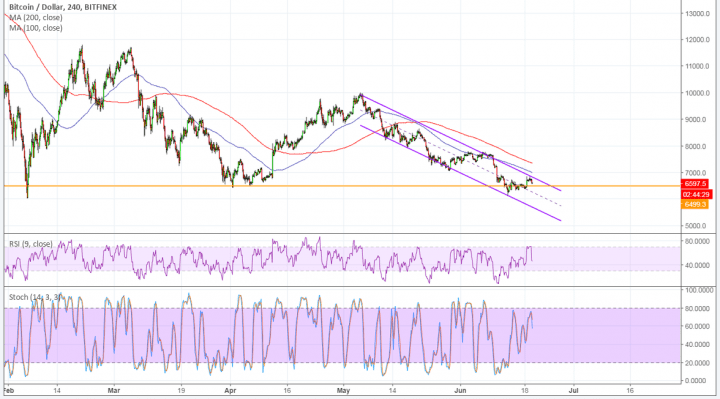 Bitcoin got a bit of a boost earlier in the week on news that New York’s FSA approved the license for Square’s Cash mobile app. This would allow its clients in the state to buy or sell bitcoin through their mobile phones, bringing in more liquidity and higher volumes.

However, technicals are still in play and limit orders at the channel top were likely triggered. It didn’t help that Goldman Sachs’ CEO mentioned in an interview that bitcoin isn’t for him. Traders are also holding out for the results of the ongoing probe into price manipulation.

Even worse, Bithumb  said in a notice on its website that all customer deposits and withdrawals have been suspended as more than $30 million worth of cryptocurrencies have been stolen. This follows an earlier hack on a smaller exchange wherein only lesser-known cryptocurrencies were affected.