Bitcoin has formed higher lows and found resistance around $6,800 to create an ascending triangle pattern. Price is currently testing the triangle support and might be due for a bounce to the top.

The 100 SMA is above the longer-term 200 SMA to indicate that the path of least resistance is to the upside. This means that support is more likely to hold than to break. Also, the short-term moving average lines up with the triangle bottom to add to its strength as support. A dip below this could still find some sellers at the 200 SMA dynamic inflection point.

RSI is indicating oversold conditions and looks ready to pull up. This also supports the idea of a bounce, possibly back until the triangle top or even higher. Stochastic, on the other hand, has room to head south so sellers could stay in control.

A break below the support area around $6,600 could lead to a drop of the same height as the triangle, which spans $6,100 to $6,800. Similarly a break past the resistance could spur a rally of the same size. 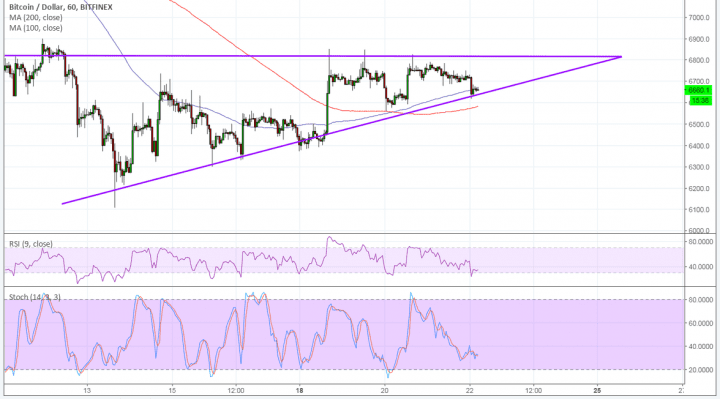 Bitcoin was off to a good start for the week thanks to news of Square’s BitLicense approval but it soon gave up ground on reports of Bithumb’s hack. However, traders seem to be holding out for more positive developments before taking price any higher.

For now, technical levels are holding as investors are quick to book profits off bounces. It could also take a strong breakout on a big position to draw more buyers in the game and to encourage them to hold on to their long positions.

Meanwhile, the dollar is also on weak footing owing to the downbeat performance of stocks and bond yields. Trade war troubles could also hit the US economy very hard and result to more declines, although it appears to be enjoying some safe-haven action still.