Bitcoin continues to trend lower but is finding support at its mid-channel area of interest. A bullish divergence can be seen as price made lower lows while RSI had higher lows.

This signals that buyers could take over while sellers take a break. Stochastic is also moving up to suggest that buyers have the upper hand, but this oscillator is nearing overbought levels and could be due to turn back down.

If the channel top keeps gains in check, bitcoin could resume the drop to the latest lows or create new ones at the bottom of the channel closer to $5,200. A break past resistance, on the other hand, could lead to a climb to the 200 SMA dynamic inflection point and beyond. 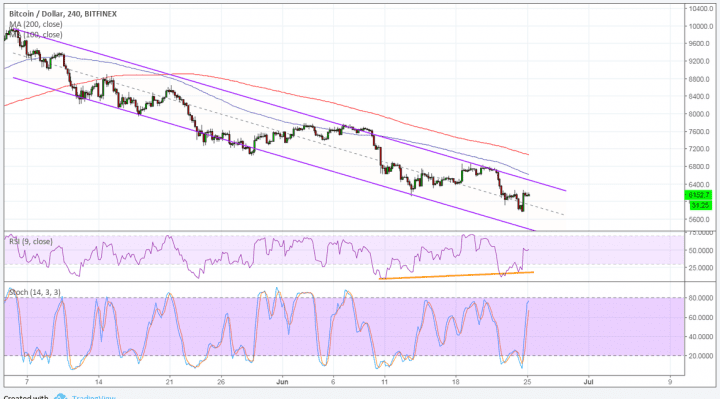 Many worry that this could wind up constraining investor activity in the country and that other governments might follow suit. This erased some of the positive vibes from earlier remarks by a senior SEC official on how digital assets shouldn’t be regulated like securities as bonds or stocks are.

Besides, overall market sentiment has favored safe-havens for the past week on looming trade war escalations. Apart from China, the EU is also at odds with the US as the latter imposed tariffs on auto imports. Retaliatory measures could wind up derailing investor confidence in general, shoring up demand for lower-yielding safer assets instead.