Bitcoin continues to trend lower as it moves inside a fresh descending channel on its 1-hour time frame. Price has bounced off support and is in the middle of another pullback to the top.

Applying the Fibonacci retracement tool shows that the 61.8% level is closest in line to the channel top around $6,425. This also lines up with the 200 SMA dynamic inflection point and a former support that could hold as resistance.

The 100 SMA is below the longer-term 200 SMA to confirm that the path of least resistance is to the downside. In other words, the downtrend is more likely to resume than to reverse. Price is moving past the 100 SMA dynamic inflection point, though, so a slight pickup in bullish pressure is happening.

RSI looks ready to turn lower without even hitting overbought levels, indicating that sellers are eager to hop back in. Stochastic is already on the move down so bitcoin could follow suit and revisit the swing low at $5,718 or the channel bottom closer to $5,500. Stronger selling pressure could even spur a break of channel support.

On the flip side, an increase in bullish momentum could lead to a move past the channel top and a reversal from the selloff. However, bitcoin has to break past the swing high at $6,857.8 to add confirmation for a bullish run. 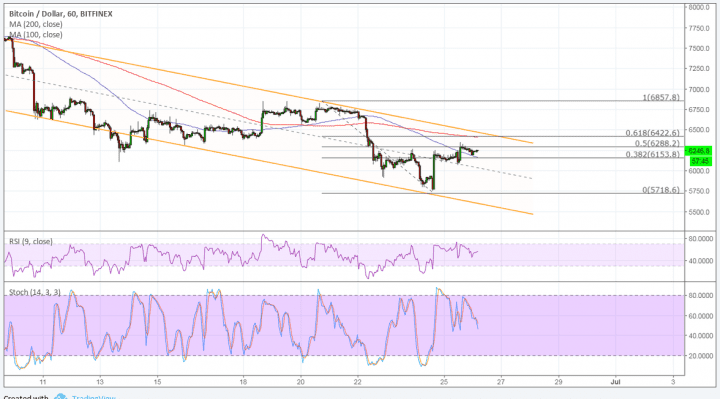 Bitcoin has been under pressure due to recent hacks on exchanges and Japanese regulators’ recent moves. Last week, exchanges in the country received business improvement requirements that could help authorities crack down on money laundering and terrorist financing activities conducted through exchanges. This led some to temporarily halt trading activity in order make the necessary updates.

Looking ahead, headlines pertaining to industry regulation and security threats could continue to drive bitcoin prices. Recall that a senior SEC official suggested that bitcoin shouldn’t be treated as a security, and similar updates could mean more gains for cryptocurrencies.