Bitcoin continues to head south and is now consolidating inside a falling wedge pattern after forming lower highs and lower lows. Price is bouncing off the resistance and might be due for another move to the bottom.

The 100 SMA is below the longer-term 200 SMA to confirm that the path of least resistance is to the downside or that the selloff is more likely to resume than to reverse. The gap between the moving averages is also widening to reflect stronger selling momentum.

The 100 SMA is also close to the top of the wedge to add an extra layer of resistance on a move higher. The 200 SMA dynamic inflection point is at $7,000 and might be the line in the sand for a downtrend pullback.

RSI is moving south to signal a return in bearish pressure without even hitting overbought levels. Stochastic is also moving lower so bitcoin could follow suit as sellers regain the upper hand.

A break below support around $5,500 could lead to a drop that’s the same height as the wedge pattern, which spans $7,500 to $5,800. Similarly, a break past the top of the wedge could spur a rally of the same size. 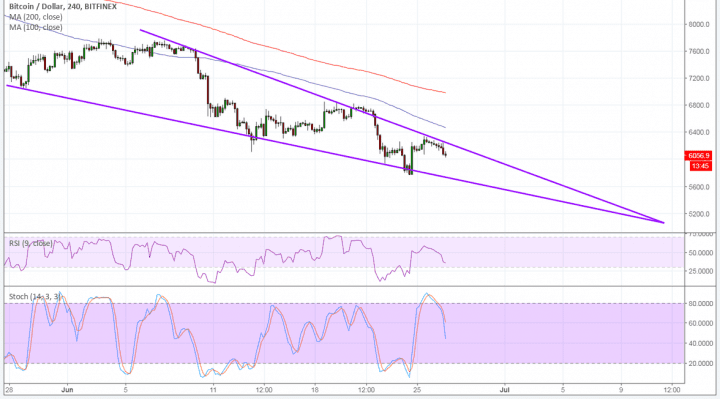 Bitcoin is still under some pressure coming from tighter regulation in Japan and previous security incidents. Investors have been quick to book profits on recent bounces, preventing any rallies from positive developments to be sustained.

Besides, the dollar is also gaining support from easing trade tensions as the Trump administration will be consulting a review committee before slapping any restrictions on Chinese investments. Still, its spat with the EU is worrisome and might wind up doing more harm than good to overall economic growth.

There are no major events lined up from the US economy or bitcoin industry in the next few days, which leaves sentiment and headlines as the main drivers of price action.