Bitcoin has formed higher lows and found resistance below $6,300 to create an ascending triangle pattern. Price is currently testing support and might be due for either a bounce or a break.

The 100 SMA is below the longer-term 200 SMA to signal that the path of least resistance is to the downside. This suggests that support is more likely to break than to hold. However, the 100 SMA appears to be holding as dynamic support for now.

Still, a bounce back to the triangle top or a move higher could encounter a roadblock at the 200 SMA dynamic inflection point. The gap between the moving averages is sufficiently wide so there is no threat of a new crossover for now. 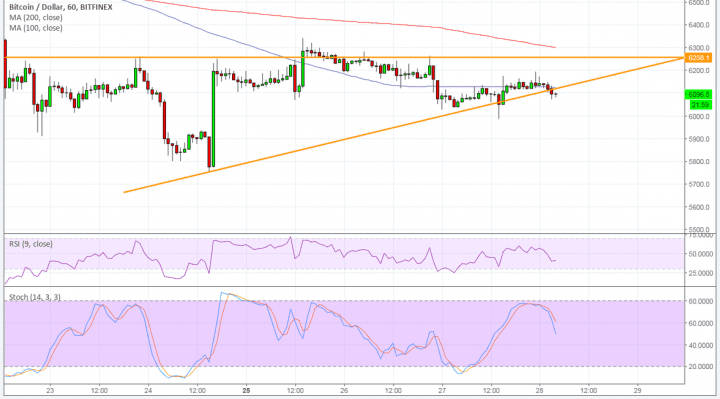 Bitcoin is still on weak footing these days as rallies have been short-lived on account of risk aversion. Trade troubles continue to weigh on financial markets and investors’ appetite for higher-yielding assets like cryptocurrencies.

Then again, weakness in stocks or commodities could soon prove positive for digital currencies, especially as traders try to seek higher returns outside of traditional markets. For now, though, the US dollar is able to enjoy the safe-haven flows, partly due to cooling trade tensions with China as well.

Meanwhile, the cryptocurrency industry is feeling the pressure of increased scrutiny such as in Japan. Regulators issued business-improvement requirements to exchanges the other week as part of their efforts to crack down on money laundering and terrorist financing activity. Similar measures could be adopted by other countries where bitcoin trading is on the rise.