Bitcoin bears have returned, leading to a bounce off the resistance at $7,700 for BTCUSD and a potential move back to the bottom of the range at $7,100. Price could also draw some support from the middle of the range around $7,350.

The 100 SMA is above the longer-term 200 SMA to signal that the path of least resistance is to the upside. In other words, the uptrend is more likely to resume than to reverse. However, the gap between the moving averages seems to be narrowing to hint at a downward crossover later on.

RSI is indicating oversold conditions and looks ready to turn higher. In that case, bullish pressure could return and lead to a bounce back to the resistance. Similarly stochastic is in the oversold region and could move up to draw buyers back in. 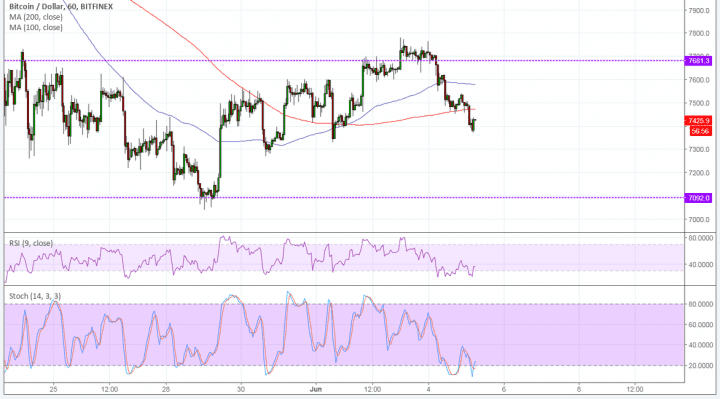 Bitcoin was off to a good start for the week but it seems to have caved to dollar strength. Easing geopolitical risks in the US and Europe also spurred some profit-taking from earlier rallies.

On a more positive note, Steve Wozniak said that bitcoin is the only real digital gold, explaining:

“All the others tend to give up some of the aspects of Bitcoin. For example, being totally decentralized and having no central control. That’s the first one they have to give up to try to have a business model.”

However, this failed to give bitcoin enough support as investor jitters remained in play and the rejection off the latest test of resistance led more traders to close out positions.

A move below the range support could lead to a steeper drop as more investors might rush in to liquidate holdings. On the other hand, a break above support could renew bullish calls and sustain a longer-term uptrend. There are no major catalysts lined up from bitcoin and the US dollar this week.