Bitcoin bulls could be ready to return as the 4-hour chart is showing an inverse head and shoulders or a classic reversal pattern. Price has yet to break past the neckline at $7,800 to confirm the potential climb.

However, the 100 SMA is below the longer-term 200 SMA to signal that the path of least resistance is to the downside. This means that the selloff is more likely to resume than reverse. Also, the 100 SMA is currently holding as dynamic resistance and might continue to keep gains in check.

RSI is on the move up but appears to be turning back down without even hitting overbought levels. This suggests that sellers could be eager to return at current levels. Stochastic is on the move up so there may be some buying pressure left enough to push for a neckline break. 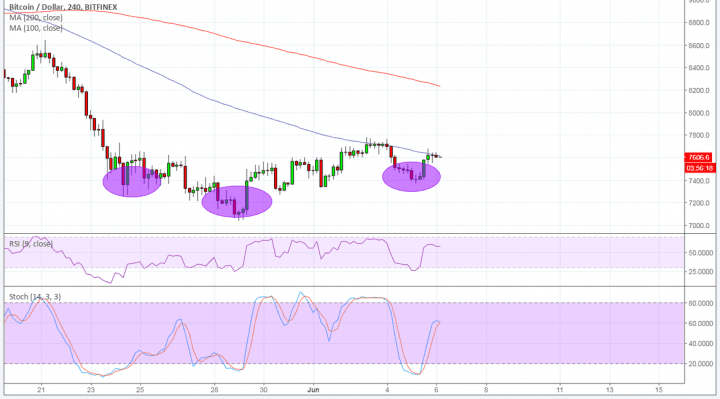 There have been no major updates for bitcoin itself but it looks like the overall improvement in market sentiment has contributed to the strong bounce. Analysts also remarked that the crypotcurrency tends to bounce around this time of the month, and it remains to be seen if the climb can be sustained.

Meanwhile, the dollar has been on weaker footing since Trump announced the higher tariffs on metal imports from its allies. After all, any retaliation could hurt the US economy most and might even cause the Fed to slow down their pace of tightening.

Because of this the dollar has been shrugging of upside surprises in data, indicating that investors are more worried about trade repercussions at this point. Still, the resolution of several geopolitical issues over the past few days has drawn bulls out and allowed bitcoin to benefit.