Bitcoin is still trending higher but might be in for another test of the ascending channel support. This time, bulls might not be strong enough to defend the floor one more time, possibly leading to a reversal.

The 100 SMA is still above the longer-term 200 SMA to indicate that the path of least resistance is to the upside. Then again, the gap has narrowed enough to signal an imminent bearish crossover that could increase selling momentum. For now, these moving averages are holding as dynamic support near the bottom of the channel.

RSI is heading south to show that sellers have the upper hand for now. Stochastic is also moving lower to indicate that bearish pressure is present. Both oscillators are nearing oversold levels, though, so selling momentum could be slowing and buyers could return soon. In that case, a bounce back to the top around $8,000 could be possible. 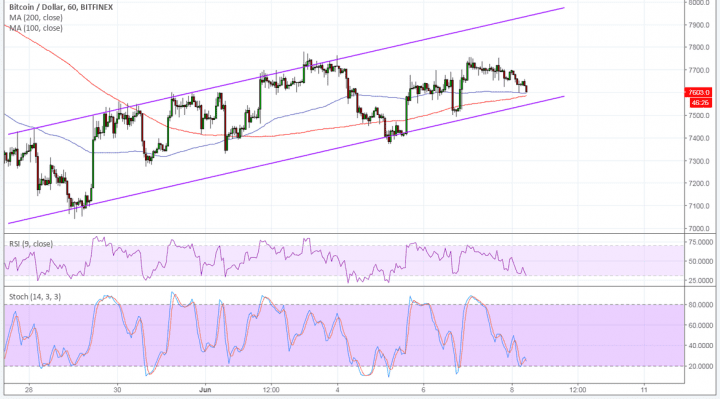 Bitcoin might need a strong positive catalyst to sustain the slow rally, though, and so far there have been a few supportive updates. For one, reports indicating a surge in activity from Venezuela has allowed the cryptocurrency to stay afloat while hints that the SEC is not looking to regulate bitcoin also helped.

The dollar has mostly been on weaker footing owing to trade war jitters but these could be eased as the G7 Summit is taking place. Note that bitcoin appears to have taken some of the safe-haven demand away from the dollar while these concerns lingered and traders might be looking to book profits off these positions soon.

Apart from that, expectations for a June FOMC hike are still in place, although dollar bulls have mostly shrugged off positive economic data. Another week without much going on in bitcoin headlines could force more traders to liquidate their positions for the time being.