Bitcoin showed another bearish signal by breaking below the short-term triangle consolidation pattern. This follows through from the break below the double top neckline on the 4-hour time frame.

The double top pattern is approximately $2,000 tall, which means that bitcoin has more room to head south before the move is overdone. However, stochastic is already dipping into oversold territory to signal that sellers are feeling exhausted. RSI is moving south but also approaching oversold levels.

Turning higher could draw buyers back in, possibly leading to a pullback to the nearby resistance levels, around the broken triangle bottom at $9,000 or the neckline closer to $10,000.

The 100 SMA is still above the longer-term 200 SMA to signal that the path of least resistance is to the upside. Then again, the gap has narrowed significantly to signal that a new crossover is imminent. Besides, price is already below these moving averages as an early signal that selling pressure is present. 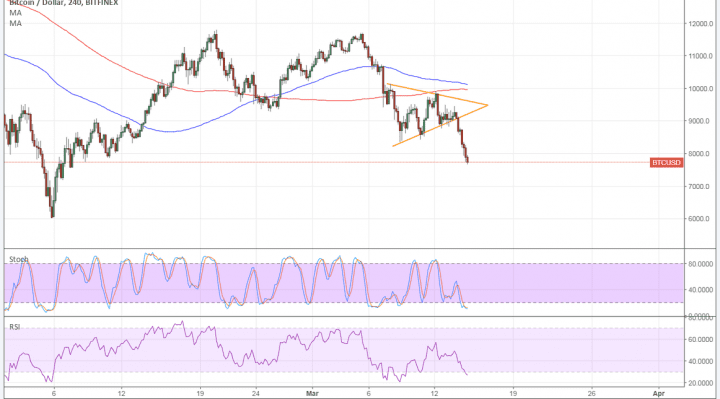 Recent headlines haven’t been on bitcoin’s favor recently, as regulators appear keen on stepping up their efforts to crackdown on trading activity. But what really weighed on bitcoin price this week was Google’s announcement that they would ban cryptocurrency ads by June, likely limiting volumes and activity in the industry.

This follows a similar move by Facebook to ban ads on ICOs, binary options, and cryptocurrencies back in January. Around that time, bitcoin price slumped by around 12% so it wouldn’t be a surprise of it dips by the same amount again with Google’s decision.

Meanwhile, the dollar has managed to stand its ground despite weak retail sales likely dampening growth data this quarter. This could also weigh on tightening expectations, but the US currency has managed to stay supported on risk aversion. After all, trade war fears are still present as Trump continues to replace White House officials with more protectionist folks.