Bitcoin is still trending lower, testing support of the descending channel on its 1-hour chart. A bounce could take it back up to the resistance, which lines up with an area of interest or former floor.

Applying the Fibonacci retracement tool on the latest swing high and low shows that the 50% level is closest to the broken support at $8800. This is also around the dynamic inflection points at the moving averages.

The 100 SMA is still below the longer-term 200 SMA to signal that the path of least resistance is to the downside. This means that the downtrend is more likely to resume than reverse. The line in the sand for the pullback might be the 61.8% Fibonacci retracement level or 200 SMA just below the $9100 level.

Stochastic is pointing up to signal that buyers are trying to regain control of price action. RSI is also on the move up so bitcoin price might keep following suit until both oscillators hit overbought conditions and turn lower. 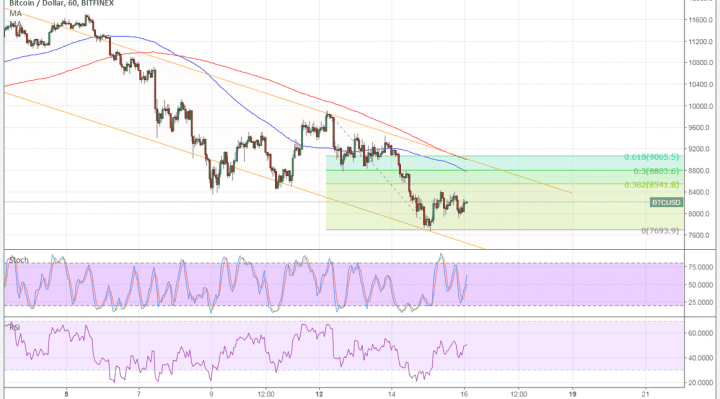 Bitcoin slid sharply lower after Google announced that it would ban cryptocurrency ads by June. This could lead to losses in interest or revenue for digital currency companies or exchanges, likely weighing on activity and volumes as well.

To top it off, traders are understandably anxious ahead of the G20 Summit during which top world leaders are expected to discuss cryptocurrencies. Recall that IMF head Lagarde focused more on the risks and potential criminal activity facilitated by bitcoin and its peers, calling upon encryption experts to help out.

Meanwhile, the dollar has gained strong support even from medium-tier data as expectations for a Fed rate hike for next week are being priced in. Although this might be a dovish hike, this boosts the dollar’s safe-haven appeal while other higher-yielding assets take hits.