Bitcoin is still trending lower and consolidating inside a falling wedge pattern on its 1-hour time frame. Price is currently testing the resistance and approaching the peak of the formation, so a breakout might be underway soon.

The 100 SMA is below the longer-term 200 SMA so the path of least resistance is to the downside. This suggests that the top of the wedge could still keep gains in check and allow the selloff to resume until the lows near $7,000.

Stochastic is indicating overbought conditions and looks ready to turn lower, indicating that selling pressure is about to pick up. Similarly, RSI is turning back down without hitting overbought levels, so sellers must be eager to hop back in. A move past the wedge resistance could still hit a barrier at the 200 SMA dynamic inflection point. 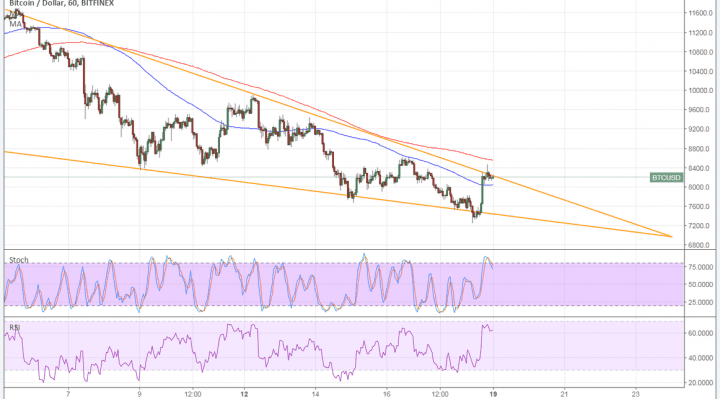 Bitcoin headlines have been mostly negative last week, punctuated by Google’s announcement to ban cryptocurrency ads starting June. This could mean less investor interest and activity by then, thereby limiting volumes and price gains. Twitter is reportedly gearing up to ban these types of ads as well.

This week, the focus shifts to the G20 Summit as traders would like to get a sense of how world leaders and regulators could approach industry developments. Openness to further developments even with oversight could still pave the way for gains while the push for tighter regulation could lead to a move lower.

Apart from that, central bank decisions could also impact overall sentiment in the financial markets. In particular, the FOMC decision is coming up and another hike is eyed, which might be dollar bullish leading up to the actual announcement. Profit-taking and possibly a dovish hike could push the currency back down.

Any remarks from central bank heads on bitcoin and cryptocurrencies in general could set the tone for trading for the rest of the week. Policymakers have been generally wary of these altcoins.