Bitcoin has recently broken out of its falling wedge formation to signal that an uptrend is underway. Price is still hovering at the 200 SMA dynamic inflection point and would need a move higher to confirm that the rally is gaining traction.

The 100 SMA is below the longer-term 200 SMA, though, so the path of least resistance is still to the downside. This means that there’s a chance the selloff could still resume.

Stochastic is moving up but is near overbought levels, which suggests weakening bullish pressure. RSI is starting to move lower to signal that sellers are trying to take over. A pullback to the broken wedge support could be underway, and if the $8000 level holds, bitcoin could still revisit the highs around $8500 and make new ones.

Note that the wedge formation spans $7000 to $11,500 so the resulting climb could be of the same height. However, if bitcoin falls back below the 100 SMA, bears could still take control. 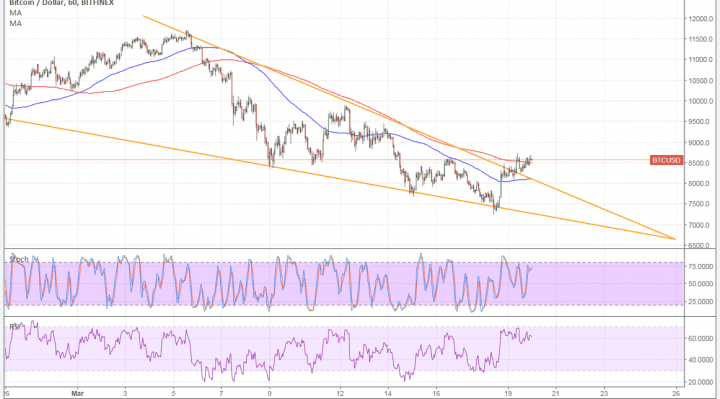 Fading concerns about bitcoin regulation appear to be in play as the first day of the G20 Summit went by without much negativity in the cryptocurrency industry. Apart from that, risk sentiment has picked up after the U.K. and E.U. struck a deal on the post-Brexit transition period, which would lift some of the uncertainty off businesses and employees.

However, the US dollar could also see some upside ahead of the FOMC decision since the central bank is widely expected to hike interest rates. Apart from boosting demand for the US currency, it could also bring risk aversion back to the table and lead to a flight to safety, which has been bearish for bitcoin recently.

Then again, the hike has been priced in for quite some time so traders would likely be more sensitive to cautious remarks that could set the tone for future rate hike expectations. Emphasis on weak inflation trends could cast doubts on future tightening, which might keep risk-taking and bitcoin gains in play.