Bitcoin could be in for a longer-term climb as it starts to form a double bottom on its daily time frame. Price is still a ways to go before testing or breaking past the neckline around $12,000 but it’s worth noting that it formed higher lows.

Stochastic is also on the move up to confirm that buyers are in control of price action at this point. RSI is also treading higher so bitcoin might follow suit until it reaches the next major inflection point.

For now, it appears to be stalling at the $10,000 major psychological level as this lines up with the 200 SMA dynamic inflection point. The double bottom neckline coincides with the 100 SMA dynamic resistance.

However, the 100 SMA is above the longer-term 200 SMA, which means that the path of least resistance is to the upside. In other words, the long-term uptrend is still likely to resume, but the gap is narrowing between the moving averages so a downward crossover is also a possibility. 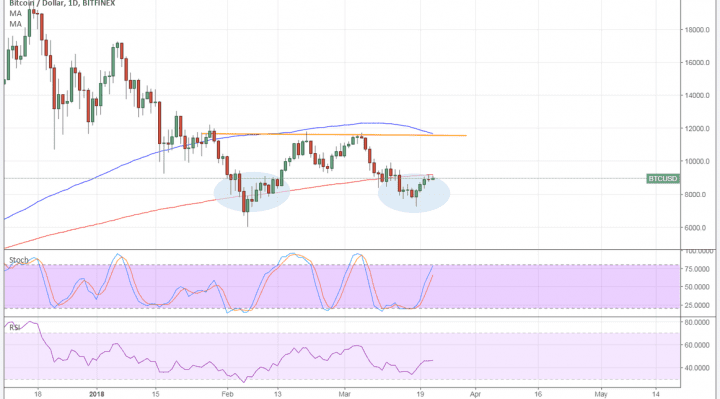 On shorter-term time frames, it can be seen that bitcoin is in a triangle formation so it could still head in any direction at this point. So far, updates from the G20 Summit have been more positive than negative, helping improve sentiment among investors.

Apart from that, the dollar has also taken a hit after the FOMC statement as hawkish expectations weren’t met. The central bank hiked interest rates by 0.25% as expected but signaled only three hikes for the year as opposed to the four that many are hoping for. Powell’s first presser didn’t contain a lot of surprises either, so bulls likely just booked profits after the announcement.

Up ahead, further developments in the bitcoin space could determine where price is headed next, although the upcoming central bank decisions could still sway overall market sentiment.