Bitcoin appears to be in the middle of forming yet another reversal pattern on its 1-hour time frame. Price has previously broken past a descending trend line and is now pulling back to form the right shoulder.

Applying the Fibonacci retracement tool shows that the 61.8% level could serve as support since this lines up with the previous shoulder. Price also appears to be bouncing off the closer Fib levels and might test the neckline at $9,200 soon.

A break past this resistance area could lead to a climb of around $2,000 or the same height as the reversal formation. The 100 SMA has crossed above the longer-term 200 SMA to signal that the path of least resistance is to the upside. In other words, the uptrend is more likely to gain traction than to reverse. The 200 SMA is holding as dynamic support as well.

Stochastic is heading south to show that sellers have the upper hand for now, but the oscillator is also dipping close to oversold levels. Turning higher could draw buyers back in and allow the Fib levels to keep losses in check. RSI is also moving south and nearing oversold levels to reflect exhaustion among sellers. 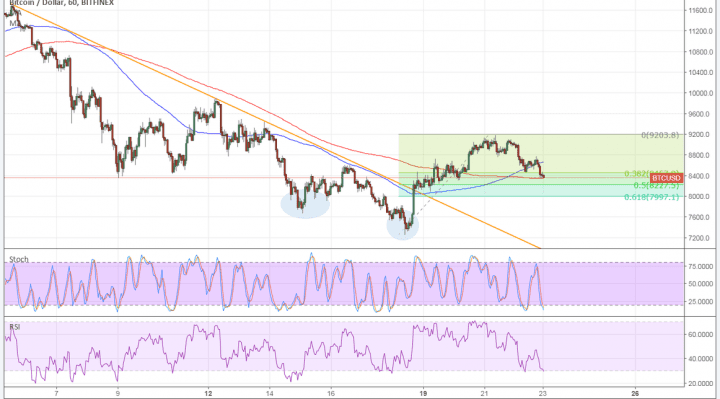 Bitcoin failed to break past the $9000 area when news of Japan’s FSA planning to shutdown Binance operations in the country broke out. As it turned out, the exchange didn’t have the necessary licenses to operate a crypto platform, but the firm’s legal team is already in dialogue with regulators.

Still, this appeared enough to erase the positive sentiment stemming from the G20 Summit. To make things worse, a flight to safety ensued in the New York session when Trump signed a memorandum to impose tariffs on Chinese goods from companies that may be involved with US intellectual property theft.

Dollar demand is strong at the moment, although there is also the chance that prolonged geopolitical risk could drive investors away from traditional holdings and onto asset like bitcoin instead.