Bitcoin could be ready to resume its selloff as the area of interest has kept gains in check. Applying the Fibonacci extension tool shows the next downside targets.

The 100 SMA is below the longer-term 200 SMA to confirm that the path of least resistance is to the downside or that the selloff could resume. The 100 SMA has also held as dynamic resistance.

Stochastic is heading up from the overbought region to signal that bullish pressure is returning while RSI is treading sideways to to signal potential consolidation. 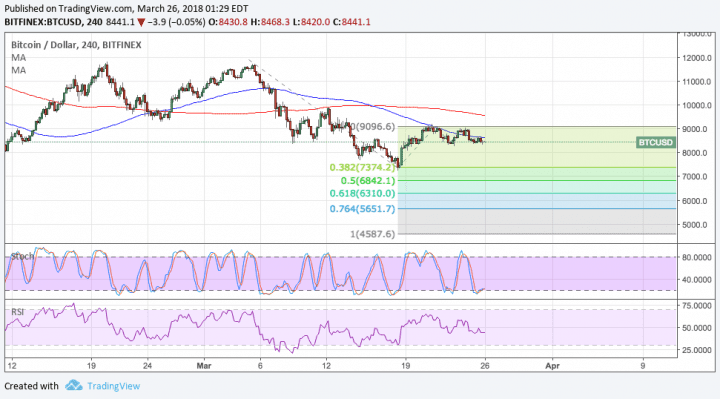 So far, geopolitical risk is weighing on riskier assets like bitcoin while boosting demand for the safe-haven dollar. At the same time, positive sentiment in the cryptocurrency industry is fading as regulatory headlines are returning.

There’s not much in the way of top-tier data from the US so consolidation could be possible, especially in the shortened trading week. Then again, the lower liquidity could give rise to higher volatility, particularly if there are any major headlines.

Bitcoin demand is being weighed down by regulatory jitters as Japan is planning to shut down Binance operations in the country. South Korea has expressed the same sentiment, which brought fears that volume in the top two markets of cryptocurrencies could be severely dampened.

As for sentiment, trade war fears have been the main catalyst for sparking risk-off flows that usually support the dollar versus bitcoin. Then again, these risks could weigh on US businesses, which also runs the risk of reviving the safe-haven appeal of cryptocurrencies.