Bitcoin is back to testing its symmetrical triangle bottom after failing to gain enough bullish momentum on the previous bounce. This suggests that sellers still have a lot of energy in them, possibly even enough to trigger a downside break.

The chart pattern is approximately $7,000 tall so the resulting downtrend could last by the same height. But if buyers put up a good fight, a bounce back to the resistance or nearby area of interest at $9,000 to $10,000 could still be a possibility.

The 100 SMA has crossed below the longer-term 200 SMA to confirm that the path of least resistance is to the downside. In other words, support is more likely to break than to hold. Also, it’s worth noting that the 100 SMA recently held as dynamic resistance and might continue to do so. 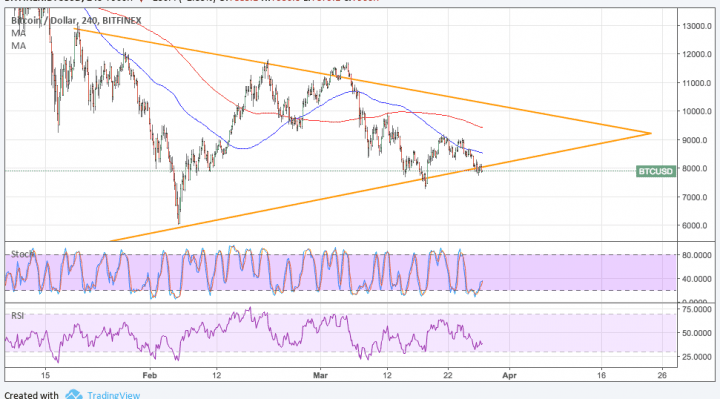 Dollar demand has gained support on trade war jitters, which have been simultaneously weighing down riskier assets like stocks and cryptocurrencies. It doesn’t help that Twitter is planning on banning ICO ads on its platform immediately, likely keeping a lid on new accounts and volumes.

With most traders taking off for the Holy Week holidays, liquidity is slated to be thinner in the coming days, which could mean more volatile reactions to catalysts. There are no major events lined up but there’s no discounting the potential impact from headlines.

In more positive news, the Cboe encouraged the SEC to allow bitcoin ETFs, citing that the Commission shouldn’t stand in the way of these financial developments. In a letter earlier this week, it said:

“Cboe encourages the Commission to approach Cryptocurrency ETPs [exchange-traded products] holistically and from the same perspective that it has historically approached commodity-related ETPs.”