Bitcoin looks ready for yet another selloff as it broke below an ascending channel and is forming a reversal pattern. A complex head and shoulders can be seen as price completed the retest to the broken support.

A break below the neckline around the $9000 mark has yet to take place before confirming the selloff. The chart formation spans around $1,000 so the resulting drop could be of the same height.

The 100 SMA crossed below the longer-term 200 SMA to confirm that the path of least resistance is to the downside. This means that the downtrend is more likely to continue than to reverse from here. The gap between the moving averages is also widening to reflect strengthening bearish pressure.

However, RSI is already dipping into oversold territory to signal bearish exhaustion. The oscillator is turning higher to suggest that buyers could still return. Stochastic is also in the oversold region, which means that sellers are tired and ready to let buyers take over. In that case, another test of the broken area of interest could be seen. 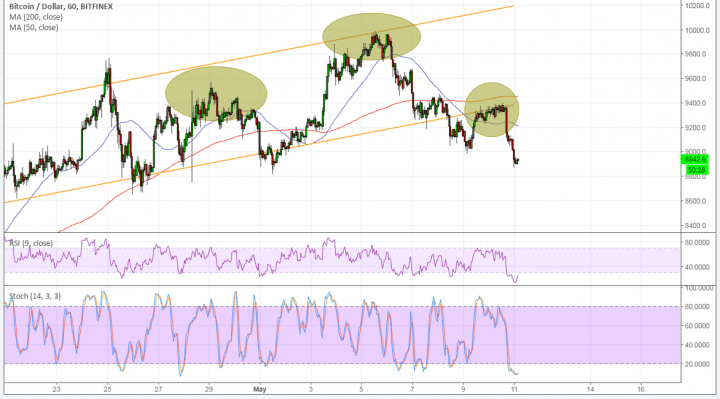 Bulls still seem to be holding out for the next big catalyst in bitcoin, but industry updates have been mostly positive lately. ICE is reportedly working on building a bitcoin online platform for big investors while the Winklevoss twins secured another approval for a bitcoin product.

Analysts at Fundstrat predict that bitcoin could reach as high as $64,000 next year, even though others say that ethereum could overtake it as the most valuable cryptocurrency.

Furthermore, Doctor went on to predict that the release of the next generation rig hardware should trigger a new round of capex.