Bitcoin has been in selloff mode recently but could draw support at the bottom of the triangle visible on the daily chart. Price has formed higher lows and lower highs to create a symmetrical triangle on this time frame.

The 100 SMA also seems to be holding as dynamic support at the moment, but this moving average is below the longer-term 200 SMA to signal that the path of least resistance is to the downside. In other words, support is more likely to break than to hold.

However, stochastic is already pulling up from oversold levels to signal a return in buying pressure. This could still lead to a bounce back to the top of the triangle at $10,000.

RSI has some room to head lower, though, and this could be enough to push bitcoin down to the triangle bottom closer to $8,000. A break in either direction could lead to a rally or a selloff of the same height as the triangle pattern. 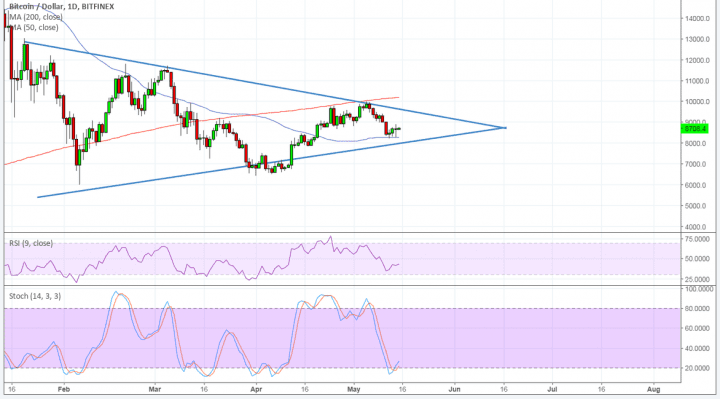 Bitcoin had another failed attempt at breaking past the $9,000 barrier, drawing in more bearish pressure and spooking some bullish investors. However, it’s still worth noting that price has formed higher lows to show a gradual increase in bullishness.

Perhaps traders are simply waiting for the next set of catalysts that could spur bitcoin higher before piling on long positions. As for the dollar, safe-haven flows and positive expectations for the US retail sales release are propping it higher these days. Then again, disappointing results for the consumer spending report could force the US currency to return its recent gains.

Last week, US President Trump announced his decision to take the US out of the Iran deal, likely triggering global ramifications that kept traders on edge. Further tensions could keep supporting the lower-yielding dollar versus riskier assets like bitcoin and other cryptocurrencies.