Bitcoin appears to be in the middle of forming an inverse head and shoulders on its 4-hour time frame. Price has yet to complete the right shoulder, though, and the small double bottom forming could also draw more bulls in.

However, the 100 SMA has crossed below the longer-term 200 SMA to signal a pickup in bearish momentum. These moving averages appear to be holding as dynamic resistance levels also.

In that case, bitcoin could be on track for a move to the lows at $6,500. Then again, stochastic is pulling up from oversold levels to show that buyers are ready to return while RSI is turning higher as well.

A move to the neckline at $10,000 could inspire fresh long positions and trigger a break higher. The chart pattern is approximately $3,500 tall so the resulting uptrend could be of the same height. 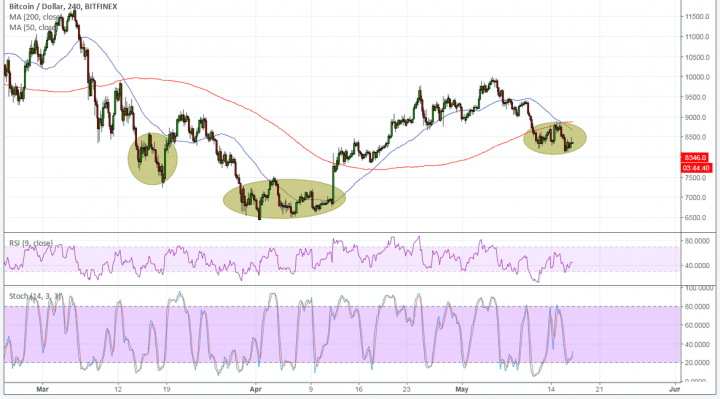 For now, investors are still waiting for the next bullish catalyst that could inspire a strong rally. There have been minor industry developments but it looks like bearish pressure on rejections of technical levels are keeping bulls at bay.

To top it off, the ongoing investigation into South Korea’s largest cryptocurrency exchange has revived fears of regulation and security issues. A recently released research also covered the energy costs involved mining bitcoin, leading some to question its sustainability.

Meanwhile, the dollar has been firmly supported by revived tightening expectations on positive underlying data points in US economic data. Geopolitical risk has also been positive for the safe-haven currency, leaving bitcoin on the back foot for the time being.

Traders would likely keep close tabs on how the cryptocurrency reacts to nearby technical levels to gauge if buyers could return soon. Key points of interest are $8,000 and $7,500 as breaks below these levels could trigger a fresh wave of selling.