Bitcoin looks ready to complete the right shoulder of its inverse head and shoulders formation as it bounced off $8,000. Applying the Fibonacci extension tool on the correction shows the next upside targets.

For now, the 100 SMA is below the longer-term 200 SMA to signal that the path of least resistance is to the downside. This suggests that the selloff is more likely to resume than to reverse. However, bitcoin is moving past the 100 SMA dynamic inflection point to show a bit of bullish pressure.

At the same time, RSI is moving up to show that bulls have the upper hand. However, this oscillator is nearing overbought levels to reflect exhaustion among buyers and a possible return in selling pressure. Stochastic is also heading up but nearing overbought territory as well. Turning lower could draw bears back in and lead to a dip below the $8,000 level. 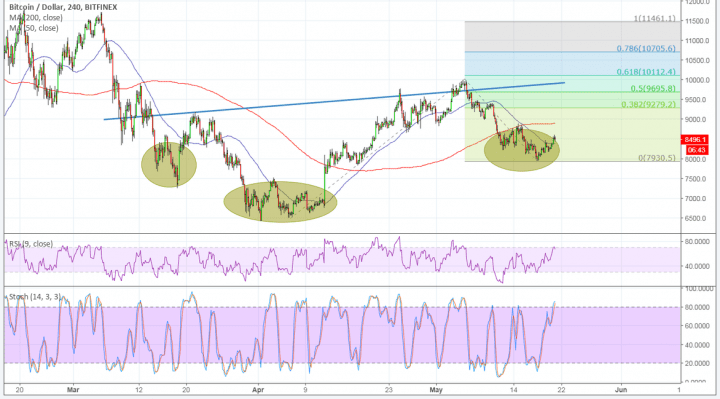 Dollar demand has been mostly in play last week and the lack of positive updates in the bitcoin industry left it vulnerable. This time, the FOMC minutes is due and weaker tightening hopes could come into play, weighing on the US currency.

This probably explains why dollar bulls are starting to lighten up on their positions, leading to some upside for bitcoin price. If this bounce is enough to draw buyers back in the game, the climb could be sustained until the neckline of the reversal pattern. From there, it would probably take a set of upbeat developments in the bitcoin world to spur an upside break and a rally.

By the looks of it, headlines are focusing on the energy costs incurred in mining bitcoin, casting some doubts on its sustainability.