Bitcoin is still stuck inside its symmetrical triangle visible on the daily chart and looks poised to test support. A bounce off the $7,500 area could take it back up to the triangle resistance around $9,000 but a breakout could also be underway.

This chart pattern spans $5,000 to $12,000 so the resulting breakout could be of the same height. However, the 100 SMA is below the longer-term 200 SMA to indicate that the path of least resistance is to the downside. In other words, support is more likely to break than to hold.

The gap between the moving averages is also widening to reflect stronger selling pressure. RSI is on the move down so bitcoin might follow suit while sellers remain in control.

Stochastic, on the other hand, looks ready to pull up from the oversold area. This could bring buyers back in and pave the way for a bounce back to a top and perhaps even a break higher. 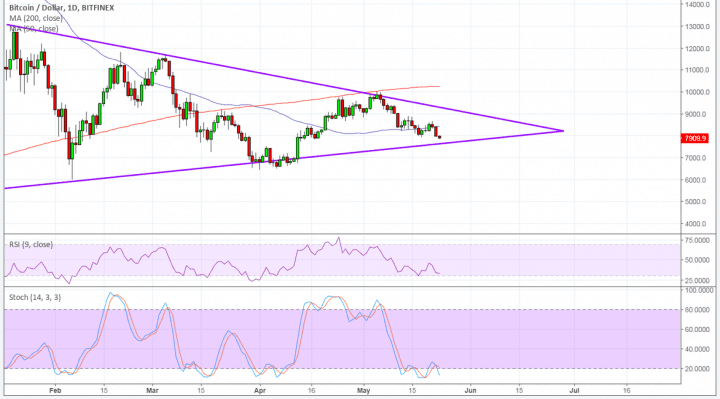 Bitcoin bears stepped up their game after FOMC member Kashkari had some negative things to say about the cryptocurrency industry. He pointed out:

“It’s a clever idea that some people came up with, but now it’s being taken to ridiculous extremes. The barrier to entry to creating a new cryptocurrency is zero.”

“If you can dupe enough people to buy it, you can pretend that you’ve launched something. And you can say, ‘Look, I’m a billionaire because I sold you one. And I own the other 999 million of them, so that means I’m a billionaire! So it has become a farce…I’m seeing more noise and more fraud than I’m seeing anything useful.”

In the absence of any positive reports in the industry, bitcoin was vulnerable to comments like these, particularly as dollar strength remains in play. The upcoming FOMC decision could be the next catalyst for the US currency.